What’s the best video resolution in today’s HD world? Is it like with cameras, wherein the more pixels or megapixels you have the better the image quality? Hold on there, cowboy. This isn’t necessarily the case. In fact, when debating “1080p vs 1440p vs 2160p: Which Is Better For You?”, it’s more of a monitor or HDTV concern than simply getting the highest resolution possible. In gaming terms, if you want Full HD, 2K, or even 4K resolutions, it mostly depends on how much budget you have and what GPU you own.

Only certain games run on 1440p or 2160p, but the majority of them go for the 1080p default, for example. So it depends on the game as well. This applies less to video. Most HD widescreen videos for TV series, projector, and movies follow the 1080p default or might go straight to 2160p 4K without bothering with 2K or QHD resolutions such as 1440p.

You may also like: Projector Resolution Explained (Clear, Detailed Images)

Nowadays, the type of resolution you should get for a monitor is driven by the type of video quality you desire. We’re not limited to squinting at postage-sized, low-quality videos blown up to a pixilated mess. With that said, let’s discuss resolutions. 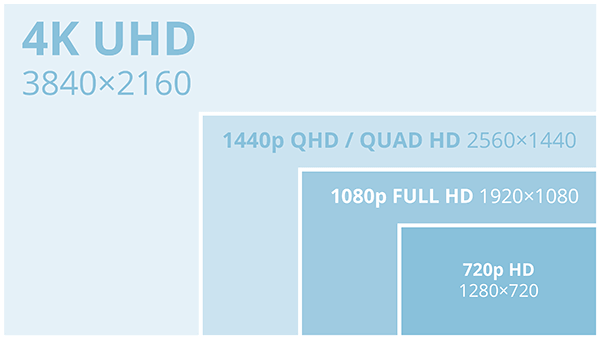 The History Before HD and The Best Displays Available

In the early days of digital media, when everyone was transitioning from analog resolutions of 800 x 600 or 640 x 480, there was really just one type of video although there were multiple video files available for them on the computer—AVI, WMV, or FLV. FLV came a little later around the time sites like YouTube became hugely popular.

You won’t have to worry (as much) about buffering (the bane of RealMedia or RM videos for RealPlayer) that took forever and has you squinting in order to tell what you’re looking at. Facebook and YouTube video as well as online news sites and educational portals now provide HD videos as a default, with at least 480p (or 144p) quality videos available for those with slower Internet. If you have a decent ISP service and fast hardware, that’s when you’ll get to really appreciate the quality leap from analog 480p/576p to digital 1080p, 1440p, or 2160p and beyond.

So which is the best monitor resolution for your PC gaming needs? 1080p, 2160p, or 1440p? Full HD, Ultra HD, or Quad HD? It mostly depends on your needs. It also depends on the pros and cons of going FHD, UHD, or QHD.

This is also true of monitors. If your monitor is a lower-grade VGA one instead of a high-grade HDMI one with the right HDMI specification, your video might falter, flicker, or move in a jerky way even if your GPU is working on all cylinders (so to speak). Most screens at 1080p are 60 Hz. To get 120 Hz screens with an output of 120 frames per second, you have to invest a lot more cash, so make sure you need such screens with the kind of games you’re playing in the first place.

It’s because even though we’re headed to a 4K UHD future for sure, consumers are still wondering if certain monitors or brands will become either the next HD-DVD (a flop format) or the next Blu-Ray (the format everyone eventually adapted because of the popularity of the built-in BD player within the PlayStation 3). The change between 1080p to 4K is only noticeable at certain games or certain machines, plus not too many games are going UHD, instead opting for FHD or QHD.

Go with what your HDTV or monitor as well as the projector works best with. In HDTV terms, it’s either Full HD 1080p or Ultra HD 4K. None of this 1440p or 2160p debate business that’s mostly a PC gaming issue.

In PC terms, it’s all about matching your resolution with your GPU. Some PCs don’t play well with 4K or 2K. Many modern PCs default to Full HD 1080p. If you want to get better HD graphics with more detail and quality from your games, it might be more prudent to go 1440p first before making that 2160p leap. Why? Not that many games are doing 4K as of yet and many so-called 4K games run decently on 1440p instead. We’re approaching the time when 4K becomes the default, but as of this writing, 1440p is a good transitional resolution between the old guard 1080p and the new guard 2160p.