If you want your home theater or cinema setup to work as practically and excellently as possible then you should definitely invest in a motorized projector screen. Motorized projector screens are excellent “devices” that assist your projector in doing its job in getting you to watch your favorite shows or movies in full widescreen. It makes your home theater setup a lot cleaner and easier to put away, for one thing. The motorized screen is able to roll in or out the large screen to save you space, for another thing.

A motorized screen is simply a screen you can roll up or down via a motor so that the space it occupies when viewing a movie could be occupied by something else. They’re like motorized blinds or curtains, except this time what they roll down is a screen.

They’re excellent for use in businesses, homes, conferences, schools, colleges, and whatnot. The ideal motorized screen is one with quiet motors that can unfurl huge screens to give your video projector the largest viewing area possible.

Motorized Projector Screens versus Other Screens

Your HD Projector Screen Should Be the Right Size

See more: How to Choose a Projector Screen

Let’s now discuss the 5 best motorized electric projector screens arranged according to our personal rankings of them all.

Here’s the lowdown on the Best Choice Products 100″ Motorized Electric Projection Screen. Although it’s not the best choice in this list as its name suggests, it’s at least among the top 5 we’ve encountered. It’s quite inexpensive just like the Vivo 100″ Electric Projector Screen. Unlike several other options on this list, it is remote controlled for good measure. This means you can pull it out or roll it away for storage at the push of a button, like your garage door.

In regards to its flaws, we don’t like how poorly written its instruction booklet is. The package also contains little protection, just like the HomeGear option. Regardless, it pays to have it delivered by people from Amazon and the like in case you’re in need of a replacement policy in case it comes to you damaged right out of the box. It’s a multipurpose type of projector screen that’s motorized yet lightweight for a device its size (about 100 inches). The Best Choice product line is a decent one that exudes affordability. You can even install this screen on the ceiling or wall.

For its price, it’s quite high quality. You’ll get your money’s worth and then some. For those concerned that it’s affordable exactly because there’s some sort of catch, refer to the flaws mention. Other than faulty instructions and poor packaging, it’s quite an excellent screen that weighs only 9 pounds and has a high contrast 1:3 gain screen that’s much better than its similarly sized contemporaries from Vivo and Elite Screens. Just be warned that several customers have complaints regarding it breaking down shortly after purchase. Gladly, they’re the minority.

This is our top recommended 2020 projector screen of the bunch. The most obvious features of the Homegear (or HomeGear) 106″ Motorized 16:9 Projector Screen are obviously its rectangular screen that perfectly fits HD 16:9 widescreen aspect ratio and the fact that it’s 106 inches in diagonal length. Furthermore, it has a super quiet motor to allow for smooth screen storage transitions. You won’t get annoyed by a loud motor creaking or revving as you bring down or pull up your screen from its resting place or storage position.

Additionally, the Homegear 106″ also has plug-and-play usability. Sure, it’s in the sense that you plug it into your electrical socket and then you can use it, but it’s still convenient. Most of any projector that’s HD or with a 16:9 aspect ratio is compatible with this screen. Even smaller SD projectors with a 4:3 aspect ratio can be adjusted to fit into this huge screen. It’s a multi-layered, long-lasting screen but the material it’s made of is relatively thin compared to other thicker screens out there. Additionally, it’s quite heavy despite its use of thin material.

This means that you have to possess a sturdy ceiling or wall to support this screen. Otherwise, it’d be wiser to invest in a fixed screen or screen with its own stand. Watch out for delivery safety and handling too. The packaging doesn’t protect the screen itself well, which has led to complaints of package damage by not-too-careful delivery men. Aside from these imperfections, the HomeGear Projector Screen is still a must-have, especially if you’re in the need of a 160° viewing angle from your home cinema or business projector.

Regarding the Safstar 100″ Electric Motorized Auto Projector Projection Screen, it belongs to this list because it’s a good 4:3 screen option for SD-sized video. Like the Vivo screen option, the 100-inch screen can accommodate HD video with a few adjustments but it works best with TV shows or older videos in a square, non-widescreen 4:3 aspect ratio. For example, if you wish to do a marathon of The Simpsons, most of its 4:3 episodes will be a perfect fit for this screen type, just like with Vivo.

It ticks all the boxes of a decent 100-inch projector screen with a motor found on this list—it’s remote-controlled and easy to install. However, you do need to watch out for its flaws, such as the fact that it’s smaller than advertised (which led to it being much lower on the list than its larger counterparts), and it doesn’t come with mounting hardware. This means you or your projector screen installer will have to buy the hardware separately. Its smallness is only slight though and it remains roughly around the ballpark of 100 inches. It has a quiet if slow, motor.

The Safstar screen weighs 17 pounds and is made of white matte screen material. It also features a 160° viewing angle just like the larger widescreen 106″ HomeGear option. The box should contain the screen itself, a remote control (batteries not included), and the instruction manual. This auto projector screen is a good choice for those who are searching for an affordable electric projection screen for standard-definition video content from vintage projectors. There are better options on this list, but if they’re not available or beyond your budget, Safstar offers a decent budget alternative.

Regarding the Vivo 100″ Electric Projector Screen, it’s one of the more straightforward projector screens of this bunch. It’s easy to install, it operates quietly with its motor, and it’s quite affordable for a 100-inch. With that said, it does have a strange penchant to get damaged when delivered. It’s such a problem that many customers have taken note of this flaw. The motor is also rather slow even if it’s quite silent. Finally, many homeowners may find its square 4:3 ratio size that’s not widescreen a deal-breaker. 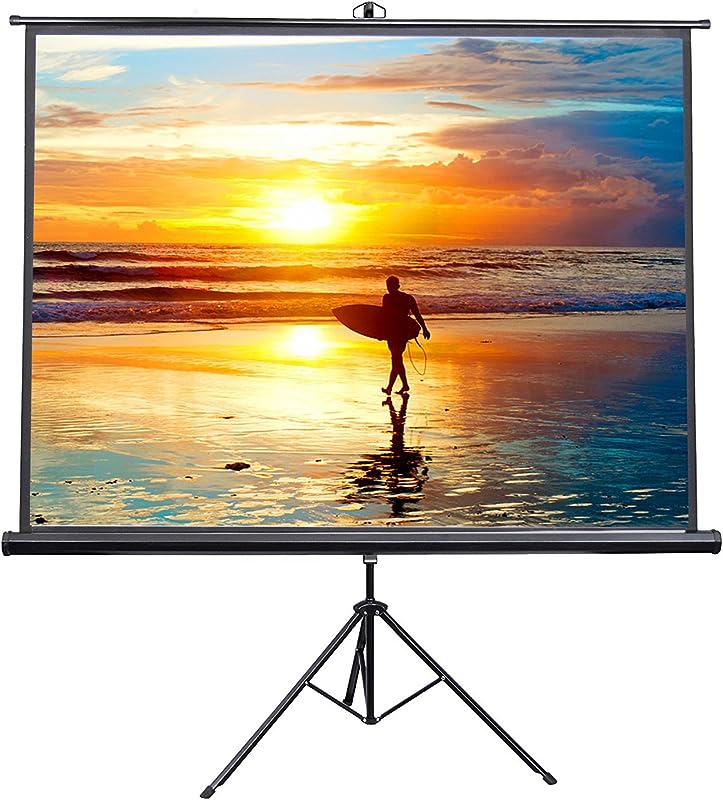 In fairness, it’s a perfect fit for older SD LCD or DLP projectors that aren’t widescreen. Its main claim to fame that allowed it to end up on this list anyway is the fact that it’s a budget projector that’s worth every penny. This Vivo electric motorized projector screen is the simplest option out there without too many frills and trimmings that many a homeowner will find excessive. Sure, if you were to play an HD video on it, you’ll either be forced to have part of the screen bleed out of the screen or shrink the video into a much smaller size, but it’s a tolerable flaw for people with vintage projectors or modern projectors with adjustable screen size settings.

There are homeowners who’ve bought this screen that love it for its easy maintenance and cleaning. Its setup is fairly straightforward, so much so that many users tend to do it themselves instead of hiring a professional installer or electrician to do it for them. Just watch out for the shipping and handling. Go for an eCommerce solution for this product that allows you to return the product if it comes in damaged. Like Elite Screens, its screen is also made of MaxWhite 1.1 gain material with standard black backing and borders on a sturdy metal casting. It works on all projectors, from DLP to LCD to LED.

As for the 100-inch Elite Screens Motorized Drop Down Projector Screen, it lives up to its “Elite” name by offering flame-retardant screen material. It’s a high-quality dropdown type of projector screen that gives the Homegear 106-inch screen a run for its money. Sure, Homegear’s offering is 6 inches larger but with Elite Screens, you get a more durable screen overall that even comes pre-assembled so that you (or your screen installer) won’t have to do much setup with it from out of the box.

There are many things going for the Elite Screens 100″ Electric Motorized Drop Down Projector Screen, starting with the fact that it’s a dropdown screen for easy storage and 100 inches to give you a big-screen cinematic feel for even the smallest of homes or apartments. There’s also the fact that its screen is flame retardant, so you won’t have to worry about it going ablaze and whatnot easily. Elite Screens Spectrum is a great option that’s even backed by a two-year warranty in case you want “insurance” that it is as durable as advertised. If it breaks down anytime during that period, you can have it repaired or replaced with no problem.

The main claim to fame of the Elite Screens Dropdown Projector Screen is the fact that it lasts a long time. It’s because of its MaxWhite material that has 1.1 gain over its textured surface.  It also has a 180° viewing angle. It’s made to be durable in the home theater or even business projector setting. With that said, you need to have an electrical socket extension for this because it has a short power cable. It’s also not acoustically transparent, thus requiring an audio system that isn’t directly behind the screen. Finally, it needs to be flush with the wall or ceiling for the best results. All in all, most of its imperfections are minor nitpicks.

We particularly favor the HomeGear 106″ Motorized Projector Screen mainly because it really makes your home, conference room, or school feel like you’re at the theater or cinema watching the latest flicks. It measures 106 inches diagonally and supports a 16:9 widescreen aspect ratio for HD video. It only weighs 28.6 pounds and it uses an easy-to-wash matte screen material that you can maintain with gentle wipes of a cloth soaked in soap water. The screen is also composed of three layers—a black PVC back layer, a terylene fabric middle layer, and a white PVC top layer. This ensures toughness for years in terms of form and high-fidelity clarity of the video image in terms of function.