More to the point, we highly recommend that you give the BenQ HT3550 4K Home Theater Projector a shot. It’s available on Amazon and it’s a certified best-seller with high ratings to match. Everyone loves the quality it brings for its price point that even challenges the features and benefits of more expensive offerings or even their cheaper counterparts out there. 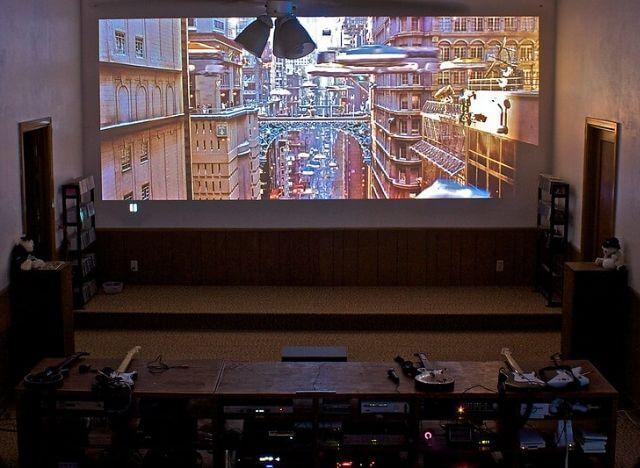 The main tagline of the BenQ HT3550 is that it offers “Colors as Directors Envisioned”. What this means is that it claims to be at the forefront of color fidelity. However, all projector types—LCoS, DLP, and LCD—offer excellent color fidelity anyway. What excellence does the BenQ HT3550 projector truly bring to the table that has garnered it such high ratings on Amazon anyway? To wit:

Back in 2013, BenQ released the W1070, which is critically acclaimed. This projector model is the first of its kind. It combines the right ingredients at the right price. This package deal allows you to do things well above its price grade. The W1070 was the first 3D projector with a 1080p HD resolution for under a thousand dollars. It doesn’t skimp on performance at all.

As for the Super-Wide DCI-P3 with True 4K HDR projector for home theaters, it has features to spare. However, quite a lot of consumers can get confused with the jargon and the terminology you need to learn when it comes to picking the right projector. This is what this guide is for, thankfully. Instead of making things hard for you to know what to buy, you’ll immediately understand what the benefits of BenQ HT3550 are along with its detriments so that you can make an informed buying decision when all is said and done.

Here’s the breakdown of the pros and cons of the BenQ HT3550.

There are several things you need to keep in mind when shopping for a projector like the BenQ HT3550 4K Home Theater Projector. With that in mind, across all categories needed to get the best possible projectors money can buy, the BenQ HT3550 is able to outshine its competition in more ways than one, from true 4K quality to multiple extras like dependable lens zoom.

This projector combines 3D features, color accuracy, sharpness, 4K resolution, and brightness together for a good price. This is how it became an award-winning projector with best-selling awards in multiple sites. At any rate, here are the things to keep in mind when shopping for a good projector and how BenQ HT3550 passes these guidelines with flying colors.

Make sure your screen, whether it’s mounted or not, matches this aspect ratio. Widescreen releases of the 21st Century are typically formatted for 16:9 widescreen. The right screen at the correct throw distance—which can be as big as 100 inches if needed—will have the image fit it exactly without any gaps on either side of the screen as well as above or below it. On the other hand, you might wish to err on the side of caution and have a bit of leeway in terms of space between the screen, particularly if you’re working with a business projector or home video projector aspect ratios beyond or smaller than 16:9.

It’s certainly better than having the projection bleed out of the frame of the screen though. There are ways for you to adjust the screen that’s present in the projector like lens shift and keystone correction. You can also stretch the image in accordance with the preferred 16:9 aspect ratio, but to maintain fidelity it is best that you go with the original aspect ratio of whatever you’re watching. This will prevent you from experiencing a poorer quality viewing experience. This also ensures that you get to see the movies as intended.

More resolution actually means more pixels. With 4K, you’re dealing with millions of millions of pixels and a wider detailed screen compared to 1080p or 720p HD. When watching movies at your backyard, it doesn’t matter as much as having a higher contrast and brightness setting to combat ambient light issues. However, in a home cinema, you’re likelier to scrutinize the screen for pixilation problems. Outdoors, the picture is never going to be perfect but indoors it’s possible to see nuances more closely, like when you’re watching a film in iMax.

HD and UltraHD work best in ideal or optimum conditions, like in your home theater or even a commercial theater. Movie buffs are all about detail whether in order to see the special effects of a superhero movie better or to see how well Al Pacino or Robert DeNiro are acting in another one of Martin Scorcese’s hit mafia films. You want things picture-perfect, and BenQ HT3550 is one of the most cost-effective ways to get genuine 4K resolution that works with so many pixels that the resulting digital pictures look as sharp as or even sharper than a brand new film roll during the film projector days of commercial cinema. 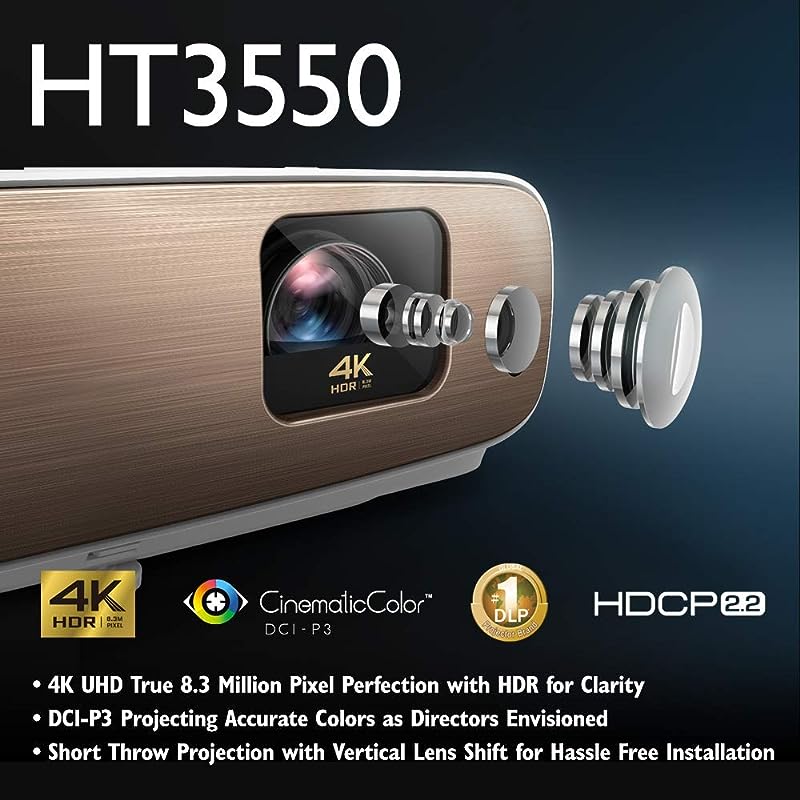 Too much brightness without color calibration typically results in something unwatchable or washed out, after all. What was projected unto our 160-inch screen was bright enough by our estimations. The BenQ HT3550 has just enough max brightness and mode calibrations for your every projector brightness need. In fact, the HT3550 is more spot-on with its brightness compared to its HT2550 predecessor. Just put it on Cinema Mode and you’ll see that out-of-the-box, the brightness is great for any BD, DVD, digital download, or digital streaming video you wish to watch. The HDR mode brightness also remains consistently fantastic.

This welcome upgrade leads to many end-user benefits like the typical cost-effective integration of more features like dynamic iris for no extra charge to quieter operation because the fewer processors can multitask or manage the task with state-of-the-art efficiency. As soon as you turn on the processor, you’ll notice that the device is 15 seconds faster on the cold boot compared to its TK800 predecessor. We also took note that switching from feature to feature or turning on one mode to the other is quite snappy. We also dealt with less lag or wait times when it came to 3D detection, HDR content detection, switching Picture Modes, handshaking, and source switching compared to either TK800 or HT2550.

The BenQ HT3550 projector is worthwhile because its projections are detailed and come with true UltraHD 4K resolution that has 8.3 million pixels of image largeness and detail. It’s able to capture the quality of HDTV sets but at much huger screens. This is cinema or commercial quality images at that, with it running the widest color gamut possible thanks to DCI-P3 technology. Cinemaphiles or film buffs love the difference it offers in terms of cinematic color performance and aesthetics. The direct vision of the director of any given show or movie is shown through this high-fidelity DLP projector.

This projector is highly recommended because it can fit 100-inch frames or screens at just 8.2 feet away thanks to the shorter throw projection of the HT3550 lens. It’s also designed for straightforward installation if you have a dedicated theater room, man cave, or home cinema entertainment center available. Preferably, you should get one where you can dim or turn off the ambient lights so that you can easily watch your movie or TV series as well as streaming video in peace. You can even play videogames on this projector on the latest videogame consoles of Nintendo Switch, Nintendo Wii-U, X-Box One, PlayStation 4, or perhaps the upcoming PlayStation 5.