The Sony PlayStation 5 (PS5) is a home video game console succeeding the PlayStation 4. It’s made by Sony Interactive Entertainment, it was announced back in 2019, and it was released on November 12, 2020. It’s so popular that stocks for it were sold out immediately even in the middle of the pandemic.

Can I play PS5 on a projector? Can you? Can anyone? Is the PlayStation 5 capable of being used with a projector the same way previous PlayStations before it could?

Can I Play PS5 on Projector?

Of course, I (and you and everyone else) can play the PS5 on the projector. You just need an HDMI cable and an HDMI port on your projector. The PS5 comes with its own HDMI port already.

This depends on the projector though. Since the PlayStation 5 is a recently released device then the best projectors for the job should themselves be the latest projectors released around the same time as the PS5.

Otherwise, you’ll need special adapters to use vintage projectors to play PS5 games, and even then you should expect downscaled 1080p Full HD to 4K Ultra HD. The adapters or converters specifically work to convert the 4K footage of PS5 to SD or Standard Definition TV size and aspect ratio. 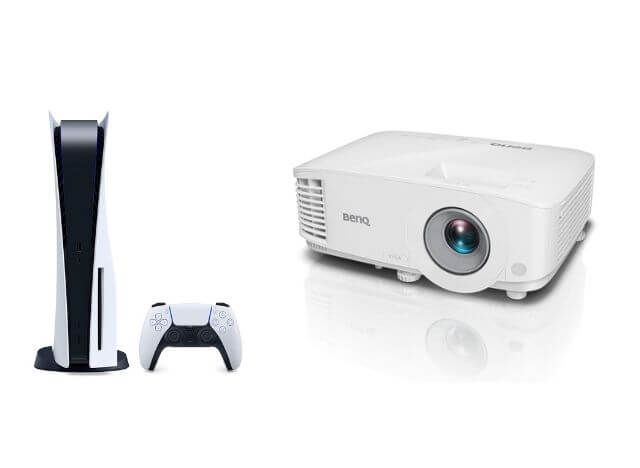 Why is the PS5 so Popular?

The PS5 is popular because it’s the successor of the similarly popular PS4. Sony has been in a bit of a winning streak since the release of the first PlayStation. The PS2 remains the best-selling game console of all time. The PS3 might’ve been pricey at first but it eventually sold a decent amount.

The PS4 era in particular lasted for many years and delivered many game advances in terms of graphics that the Wii-U and the Xbox 360 couldn’t keep up with. Regardless, the PS5 was released on November 12, 2020, in North America, South Korea, New Zealand, Australia, and Japan.

You may also like: Best Projector for Retro Gaming

A week later, around November 19, 2020, the PS5 was released worldwide. It was sold out almost immediately and many scalpers command outrageous prices for the units they’ve bought.

Why Should You Use a Projector with Your PS5?

If you want to translate the full quality, frame rate, and resolution size of the PS5 on the big screen then you should get the latest projectors with the highest native resolution possible.

The reason why you should use a projector with your PS5 is that it makes for a better and more immersive gaming experience overall.

It’s like playing a game in a cinema or a home theater. The bigness of the screen adds to the gaming experience. This is especially true of open sandbox games or first-person shooters with huge worlds to explore.

When playing the 9th generation of videogame consoles—the Sony PlayStation 5, the Microsoft Xbox Series X, and the Nintendo Switch—everything is in HD or approaching HD. Even Nintendo, which is notorious for its low-specs game consoles, have hitched itself to the HD bandwagon.

Which Projector Should You Use with Your PS5?

Good examples of quality PS5 projectors include Samsung’s The Premiere LSP7T and the Optoma UHD60 4K Projector. When looking for a good gaming projector for the PS5, the Switch, and Xbox Series X, it’s all about large-picture projection on top of low latency

Low latency refers to the image’s responsiveness to your inputs. This is because some projectors, even native 4K resolution ones, tend to have delays when you’re inputting commands on your character, thus resulting in lag or a slight delay of action that could cost you a game or around.

There’s undoubtedly a big upgrade in media quality, but to be quite honest the pixel density of 4K cannot be fully appreciated on an ordinary HDTV. You need an extra big TV to see how many polygons and ray tracing goodness the PS5 possesses.

The problem with big TVs is that they’re big on price as well. In contrast, a UHD projector can produce twice the bigness in screen size as the largest plasma or LCD flatscreen while still only having a fraction of its price.

How Do You Connect Your Projector to Your PS5?

It’s simple. Plug one end of your premium 4K or UHD HDMI cable to the PS5 and the other end to the projector. You don’t even have to turn them off first before plugging since HDMI is plug & play (it allows hotswapping or swapping cables while the device is turned on).

The PS3 helped popularized the Blu-Ray by being a Blu-Ray player itself. Now the PS5 is helping popularize downloadable games off of the Internet via digital purposes on top of the tried-and-true disc format in BD quality storage.

The PS5 is basically a 4K UHD BD player that’s also a videogames console in and of itself. It uses high-powered state-of-the-art technology to showcase to you the utmost limits of technology in the 2020s and beyond when it comes to hi-fi graphics and the highest polygonal counts possible.

How Do You Get Your PS5 Sound Going?

There are a few ways to audio working on a projector, some of which are showcased below. Your options include using the projector’s built-in speakers, getting a separate cable onto the PS5 or the projector in order to link it to an A/V receiver, or using Bluetooth technology for wireless audio enjoyment.

Long story short, your media source is linked to the projector via HDMI, and then it’s also connected to the audio device through a separate cable. You can source the audio from the PS5 itself or via the projector care of a Bluetooth speaker or soundbar.

The audio can come wired or wireless from the source media or through the projector acting as a middleman or audio source itself.

This makes plugging in your PS5 to your projector relatively easy, right? You still have some concerns regarding which cables to buy (something premium-grade for 4K projection) and how low latency your projector of choice is.