You can watch normal TV on your projector, from the news to soap operas. This is because everything is now available digitally. You used to need an optical cable, a TV tuner, and an antenna in order to tune in to terrestrial television.

Nowadays, you can instead go to ESPN or Fox Sports or some other dedicated sports channel in order to view live sports, whether it’s theatrical sports like pro-wrestling or real team sports like basketball, baseball, and (of course) football.

Can you watch football on a projector? You bet the bottom dollar you can! Keep on reading to find out why and how.

Can You Watch Football on a Projector?

Yes. If you have a modern projector with an HDMI port, you can connect your cable or satellite TV box to it with an HDMI cable. Otherwise, you might need some sort of A/V adapter for component cables or something. You can also watch sports DVDs or Blu-Ray discs via projector as well.

However, when you say football, you’re likely to be referring to two things—American football (some sort of rugby and hockey hybrid with a pigskin ball) or International football (known in the U.S.A. as soccer).

You can view either sport live at leagues like the NFL or the Premier League with the right cable box or TV tuner. To get international viewings of American or International football, you’ll need to check with your provider for more details. 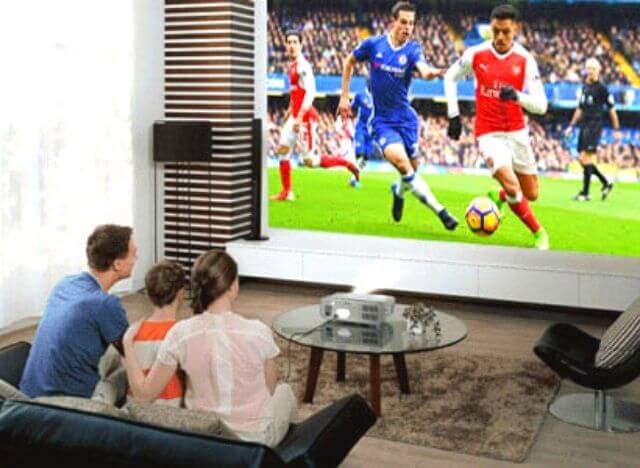 Get a Modern High-Spec Projector

Also, make sure you have a high-spec projector on hand to view the action. Naturally, it should have an HDMI port. However, you should also check if it’s a native 4K or 1080p projector since you’ll be viewing a live sports feed with high frame rates involved.

You want to be able to catch every frame of faction in full HD or 4K. Also, make sure that you have a low latency or gaming projector since this keeps your projector from delaying the feed or de-synching itself from the audio at such high resolutions.

Another indication that you have a fantastic projector unit that’s the gold standard of projectors is that it operates on its own operating system like a smart device or uses other smart devices to make gaming and media hookup easy.

What Media Sources Should You Use to Watch Football on Your Projector?

A TV tuner allows you access to a free or terrestrial TV feed of the game (complete with commercials). A cable or satellite box feed requires you to pay a subscription fee to access channels like Fox Sports and ESPN to watch football and have “talking heads” talk about the sport for good measure.

Both devices provided they’re modern devices, make use of HDMI connections to work. Otherwise, you’ll be using older A/V connections like component, composite RCA, or S-video (highly unlikely though). You can also stream the game online with a streaming service.

Sports Streaming Service and the Internet

Most people are aware of streaming services like Netflix and Amazon Prime (or, to a lesser extent, Hulu and YouTube Red) in order to get their fill of exclusive streaming TV shows mixed with network shows like Friends and Family Guy.

You can access them through HDMI-connectible media devices like the Roku Stick and the Amazon Fire TV Stick. They should easily stick to your projector’s HDMI port unless otherwise indicated. You should also have a home Wi-Fi included since you’ll be using that to access the subscription streaming service.

You may also like: What is the Best Projector for a Sports Bar?

What Sort of Projector Should You Use to Watch Football?

If you want to watch NFL or UEFA League football as well as the Super Bowl or the FIFA World Cup at the highest quality, you should get (video) gaming projectors. A gaming projector isn’t only good for videogames due to their low latency. It’s also good for sports viewing.

A gaming projector, like a gaming laptop, has al the peak specs for a high-caliber projector, particularly when it comes to its brightness, contrast ratio, image size, resolution (HDR), aspect ratio (16:9), and low latency (make it DLP to keep up with the high-frame-rate action).

To ensure you have high lumens reaching 5,000 lumens or even 8,000 lumens, you might to pay extra for a triple laser system like the one found on the Samsung LSP9T 130-Inch Class 4K Projector. LSP9T has HDR imagery available too compared to its little brother, the LSP7T.

You can still watch football with LSP7T even when it’s outdoors because it still has one laser lamp available that produces 4K imagery on a maximum 120-inch screen. It’s just that LSP9T makes your football viewing more colorful because it has one laser for every color—red, green, and blue.

The LSP7T is more affordable due to its smaller picture and lack of HDR capabilities, which shouldn’t be too noticeable when viewing the football supremacy of the Patriots and the like.

In the end, in order to not waste the lumens of your projector, you should use a properly angled or multi-layered ALR screen. It makes your projection look like you’re viewing it in the dark or in a room with good lighting control like a commercial cinema.

The ANSI lumen count ensures how clear the picture will end up even in daylight, but the ALR screen helps deflect ambient light that could rob the intensity of such a high-lumen projector image. The best scenario is ALR and high lumen projection, which results in HDTV-clear screenings.

Installing a fixed projector in a light-controlled rec room is your best bet when viewing a sports spectacle like the Super Bowl or a regular NFL season game. The projector won’t easily overheat as long as you limit your home cinema viewing every weekend game or so.

You can also use a high-spec projector to watch other sports tournaments or games like the NBA Finals, the MLB World Series, or some sort of boxing or UFC PPV. If you’re going to view football games outdoors, at least use a high-lumen projector and/or an ALR screen.