You can bypass it either by using hardware like a splitter or using an app in order to allow anything other than YouTube to mirror your iPhone content onto your projector.

In order to make Lightning to HDMI work with Netflix, you should somehow bypass the HDCP that’s keeping copyrighted content from the app or website to mirror on the projector what you’re seeing on your iPhone.

How to Bypass HDCP 101 for iPhone to Projector Connections

Netflix can run on certain projectors via a Lightning to HDMI connection when they use certain apps. For example, the Nebula Capsule projectors use the Nebula Manager app in order to play Netflix on them when normally the HDCP keeps media sources like iPhones from mirroring copyrighted content. 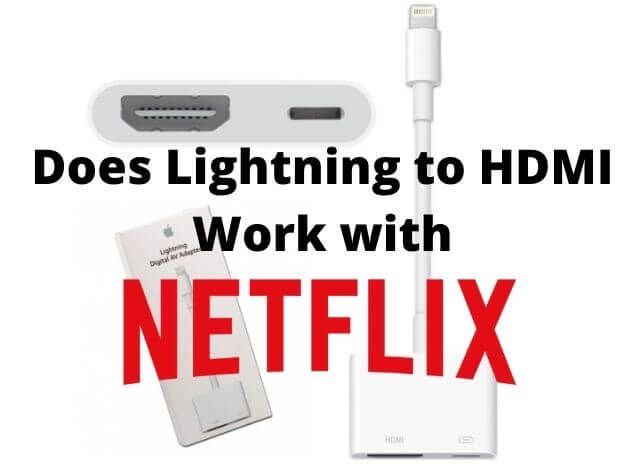 Ever since about 2017 or so, the official iPhone Lightning to HDMI adapter ceased being able to project copyrighted or copy-protected content from sites like Netflix. To be more specific, a copy protection flag was widely implemented on all phones since the iOS 11 update.

Since then, some people have opted to look for adapters that could bypass the HDCP for mirroring purposes because the official one deliberately throttles HD feeds of copyrighted content, even those from YouTube.

Is It Netflix’s Fault Why iPhones Can’t Stream Netflix on Projectors?

Although Netflix does its part in safeguarding copyrighted content from pirates and digital recordings, it was actually Apple that enforced DRM on iOS 11. Since that operating system onwards, you cannot use your projector/HDTV with your HDMI cable or Lightning to HDMI converter.

If you want to stream Netflix on your projector, you’re better off doing so with an Android and the right app or with a Roku Streaming Stick+/Amazon Fire TV Stick.

How to Go About Linking the iPhone to the Projector

Reboot the iPhone then watch or play the content with hopefully the HDCP error gone. You can also connect the splitter (since it splits the stream to two displays) to another device, such as an HDTV or HDMI monitor.

The Different Ways of Dealing with HDCP

You can get an HDCP stripper or analog cable to disable HDCP. The issue is that you have to get a specific cable that turns the signal analog while still being able to read the HD stream. With game consoles, there are even ways to deactivate HDCP via system settings.

Use an Analog Cable to Bypass HDCP

HDCP “protection” is removed when you use an analog cable but the image should get degraded or downscaled when push came to shove.

Connect your media source—your iPhone with a Wi-Fi connection that can stream Netflix—with an HDMI to analog (component or serial digital interface/SDI) cable instead of an HDMI cable. Afterwards, connect that to your projector. This is also applicable to your HDTV or HDMI monitor.

Turn off the HDCP protection of your iPhone. With PS4, you can turn it off by opening Settings, going to the System section, and turning off the “Enable HDCP” option. You should then get the error “Cannot Start the Application. You Must Turn on Enable HDCP,” or something similar.

We’re now attempting some settings adjustment here just to mirror your iPhone’s Netflix feed to your projector. Your converter might have an HDCP stripper or deactivator mode or button present to streamline the process.

You can go to Amazon, eBay, or some other electronics shopping site in order to buy about $13 HDMI splitter with an HDCP stripper. From there, you jury-rig, jerry-rig, or daisy-chain your Lightning to HDMI converter with the splitter in order to strip away the HDCP protection and end up with a mirrored Netflix feed from your iPhone to your projector.

You can also avail of the ViewHD Powered Splitter from Amazon, which costs about $15.95 or $16 at the time of this writing.

Stripping the HDCP Signal Away

If you can find an HDMI splitter that works with your iPhone by having a Lightning port or jack available then you won’t need to daisy-chain the converter with the splitter. However, for the most part, stripping the HDCP signal away is your best bet without downscaling the HD stream too much.

You can avail of hardware such as the HDMI Splitter 1 Input 2 Output Amplifier Switch Box Hub 1×2 HDTV 1080p 3D to do it for you, although most cheap 1×2 splitters should get the job done.

Avoiding the Daisy-Chain and Streamlining the Connection

You can avoid the daisy-chained connection of a Lightning to HDMI cable linked to a HDMI splitter by getting a splitter with a Lighting cable port for your iPhone to connect to.

It’s mostly about bypassing the HDCP block instituted by Apple itself in order to limit streaming Netflix on your iPhone without any mirroring from projectors or HDTVs.

Other Uses of the Splitter

At first, only link one output to the splitter.  If it gives you an image from our projector and you’d like to connect or mirror to another display (like an HDTV), you can go that route too.

Another neat trick with the splitter aside from converting the HD signal to something that won’t get blocked by HDCP is the ability to split the iPhone’s Netflix video feed with its audio feed. You can put the audio feed to a soundbar or stereo system to make what you’re watching much more worthwhile to listen to.

Many splitters that claim to be HDCP strippers won’t work on certain iPhone models that make use of the Lightning cable output. Shopping for the right splitter might entail trial and error.

Therefore, make sure you have the 30-day money back guarantee for your every purchase, particularly those with the “no questions asked” clause to protect yourself from getting stuck with a pile or mountain of splitters that don’t work.

What About AirPlay and Downscaled Video

Some have used AirPlay via the Apple TV in order to connect a projector to your iPhone for Netflix streaming purposes. However, Apple and Netflix have supposedly gotten rid of that functionality.

This might not work but for several years, you also have the option to mirror the Netflix feed on your iPhone to an Apple TV, which you can then mirror to your projector. This can only work if your projector is compatible with the Apple TV and it can recognize it.

The reason why we say it might not work is because it’s already 2021 and Apple might’ve already patched up the ability to use Airplay in order to mirror an iPhone Netflix feed playing on your Apple TV to a projector for device exclusivity purposes.

How Much Is The Downscale on HDCP Strippers?

This depends on how big the resolution is. You’re typically downscaled to 1080i (interlaced) or 720p (progressive scan). An analog connection results in downscaling of that magnitude and more, so to minimize the downgrade in quality, get a Lightning to component converter and connect to a projector with a component output.

If you can find a Lightning to HDMI converter that’s also an HDCP stripper then that simplifies things and saves you the trouble of connecting your iPhone with a converter then a splitter. So many connections can truly lead to bad lag or freezing signals, among other dire possibilities.

Experimentation might be the key to unlocking your Netflix projector streaming fix if you’re an Apple product user. It’s much easier with Android, and it might even have apps specifically to allow an HDCP bypass.

For Apple, it’s more of an uphill climb that might force you to convert your high-resolution digital stream to something more analog and lower resolution. Watch out for false advertising so you don’t end up with a worthless (if cheap) splitter that doesn’t work with iPhones but instead with PS3s and PS4s.

The specific patch that ended Netflix feeds for Lightning to HDMI connections between iPhone and projector is the iOS 11 operating system. This prevents copyrighted content to play on your projector, HDTV, monitor, or any other HDMI display device out there.

Yes, it’s a bummer. If you want to still be able to play Netflix through an Apple phone connection, you need to research the right techniques or buy the right gear. Apple has a tendency to find ways to patch out these loopholes. They really don’t want iPhone to projector streaming unless it’s for non-copyrighted videos on YouTube and whatnot.