So Full HD vs Ultra HD (UHD vs. FHD)—what’s the deal with that? Keep on reading to learn the differences between the two. You can specifically learn what UHD and FHD mean as well as numbers like 1080p, 1080i, 720p, 4K, and 8K.

However, you need to understand what 4K UHD actually means to know whether it is a worthwhile purchase for you over the more common standard of 1080p Full HD (as opposed to 720p HD). Their difference? Quite huge.

What is FHD Anyway?

FHD is short for the Full HD or the full high definition standard, which is 1080p. In turn, 1080p has the specific pixel resolution or screen dimensions of 1920 (columns) x 1080 (rows) pixels.

This is equivalent to 2 megapixels (MP) or 2,073,600 total pixels. The “p” part of 1080p refers to progressive scanning because there’s such a thing as 1080i (interlaced). It displays or scans each pixel row in sequential order to produce the image.

The interlaced standard scans pixel rows in alternate order for CRT TVs of yore, which causes instances of motion blur.

UHD is short for Ultra HD or the ultra high definition standard, which is 4K. UHD isn’t necessarily 4K but almost about 4K. 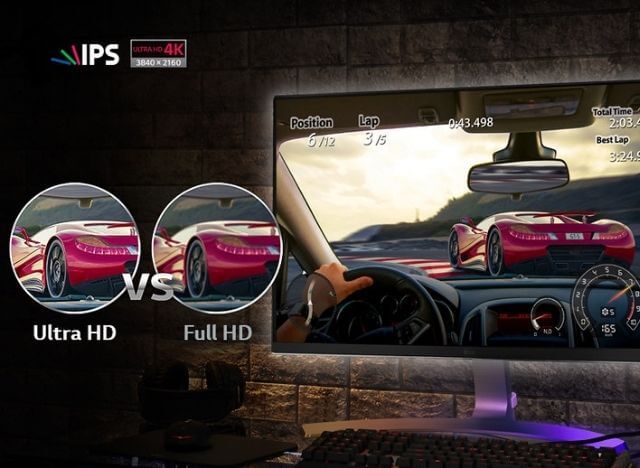 However, UHD offers a higher price compared to FHD, thus it being the tradeoff. FHD also provides more compatibility since its ubiquity cannot be questioned.

It’s as much of a standard as HDMI is the HDTV standard for HD connections. There are times when you don’t need UHD and it’s pretty rare compared to FHD even in the current year of 2021.

FHD provides a fine viewing experience, especially if your primary concern involves budget instead of resolution.

UHD resolution debates feature more in gaming circles concerned with high-fidelity movement, 60 FPS, and no lag gaming for first-person shooters or fighting games instead of the ordinary homeowner who’s usually satisfied with an “ordinary” flatscreen TV or projector.

UHD has double the pixels to elevate the viewing experience but more on larger screens.

What Resolution is Your TV or Projector?

If your TV or projector has a 1080p resolution it should play a 1080p version of any 4K content through what’s known as downscaling.

You can only really see the 4K difference on a fully 4K TV or projector that’s large or even a 4K projector in order to see the actual size of a 4K resolution screen in full fidelity or faithfulness.

FHD vs. UHD in Terms of Resolution and Pixels:

When comparing 1080p with 4K (either home TV UHD or cinematic True UHD), UHD has four times the pixels than FHD.

This means you need four 1080p images to fit into the space that a 4K image can hold, which doubles the overall resolution when push comes to shove.

The technologies that primarily support UHD TVs include OLED and LCD (QLED and LED/LCD). Even though resolution defines UHD TV makers have added some features to it in order to take advantage of its glut of pixels, such as a wide color gamut and HDR.

Thanks to its wider range of colors and support of high-dynamic-range (such that the color gradation on 4K is smoother and less divided due to the wide color gamut), 4K offers an even more realistic picture that improves upon the clarity offered by 1080p and plasma TVs of yore.

It’s no wonder you can find True 4K support from the cinema. What’s more, movie theaters take better advantage of 4K since those millions of pixels fit better on bigger screens.

If you want to get 4K content from Hulu and Netflix, you’ll have to pay extra for them. What’s more, the 4K content available on those streaming services is limited and most have 720p HD or 1080p FHD available instead.

To avail of up to 4K plans, you have to avail of a high-tier plan in order to get the best resolution possible, but most people avail of the 1080p plan anyway since most 4K plans have the content originally in FHD, only blown up or upscaled to twice its original size. 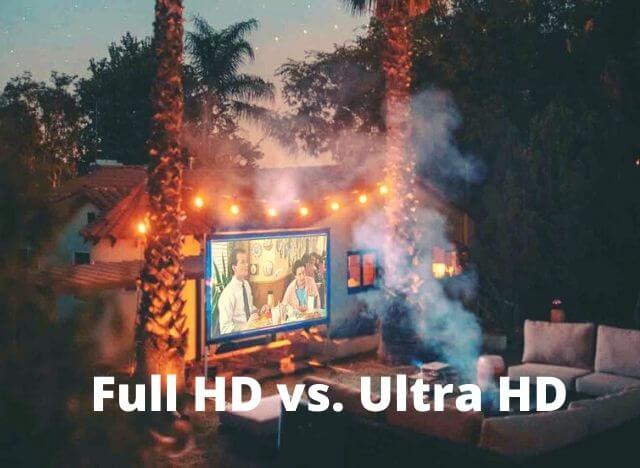 1080p FHD and 4K UHD are likely to look similar in smaller screen (arguably the smallest screens) than they would in widescreens, projector screens, or cinema houses. Just as most monitors, displays, and TVs today, including the cheaper ones, feature FHD, it’s the same deal with smartphones or smartphone apps like Instagram and Facebook.

Meanwhile, on smartphone screens, the only difference between 1080p and 4K would be more bandwidth spent and better results when cropping a video.

Digital Cameras and Videogame Consoles on 1080p vs. 4K:

Digital cameras offer 1080p FHD or higher, up to even 8K and 10K since they’re still images rather than moving images.

These cameras include DSLR, mirrorless, webcams, and built-in laptop or smartphone cameras, by the way.

As for videogame or video game consoles, they tend to default on FHD, upscaling even lower 480p content.

The best and latest games, usually first-person shooters or fighting games as well as immersive horror games, make full use of 4K settings and even the highest frame rates possible.

Don’t glaze over the definitions of FHD and UHD because you should remember them. You should at least know which one is more expensive and why you should get one over the other.

This article has it all covered. It has reviewed the differences and similarities between 1080p Full HD and “2160p” 4K Ultra HD so that you know when to get one standard over the other.

Bigger TVs and modern projectors should benefit from 4K. Anything bigger, like a home or cinema projector with a huge screen, can benefit from a 4K display because those millions of pixels can cover a wider area versus being squished or cropped into a small phone or tiny tablet.

1080p is the default and an upgrade to the displays available in the CRT TV or 4:3 ancient projector era of home entertainment (which was 576p/i or 480p/i and below).