Projectors provide many uses to anyone who has them, from watching TV shows and movies to playing videogames. You can also use them for the sake of watching free TV channels broadcasted on terrestrial TV or non-cable TV full of advertisements and whatnot.

How do you go about this when those signals were designed mostly for old-timey TVs with bunny-ear TV antennas? We’re here to cover the ins and outs of this topic, actually.

Here’s what you need in order to connect your projector to your TV antenna.

You may also like: How to Connect Computer and TV to Projector

How to Connect a TV Antenna to a Modern Projector

Here are the different ways you can go about connecting your TV antenna to your projector. 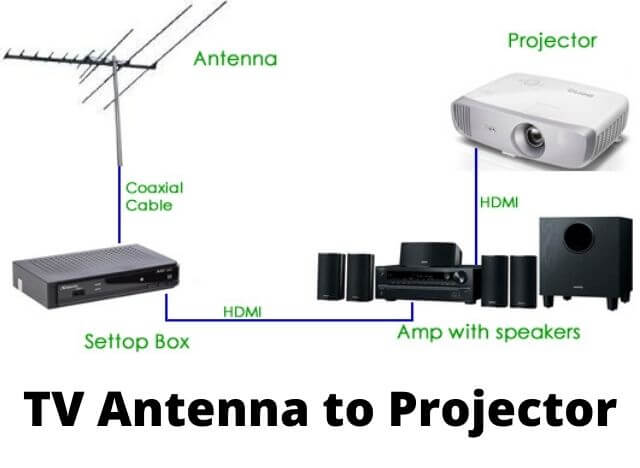 All About The Tuner Box

The tuner box is also known as a set-top box, a digital television converter box, or basically the antenna version of the cable box.

You can avail of them in many retailers out there. They digitize the analog broadcast signals typically sent to a CRT TV.

With a cable box, the signals are already digitized so you only need to connect them to the projector. Some of these boxes even enable you to record television shows. Digital signals are required for HDTVs with HDMI connections.

(Don’t) Connect a CRT TV to Your Projector

It’s a fellow display device rather than a media source. You can try to connect it to a TV tuner box then link the box to the projector, but it’s easier to just get an antenna instead rather than the CRT TV.

In contrast, an HDTV set could mirror its terrestrial TV contents to a projector just fine along with a cable box connection.

You can purchase a TV tuner box such as the ATSC Tuner Box and make sure it has the correct input, like HDMI, for your projector of choice.

From there, attach the antenna to the coaxial input of your tuner box. The box will serve as the middleman between the antenna and the projector, thus turning the projector into an old-timey TV set.

The box will then be responsible for scanning over-the-air broadcast TV channels for viewing. It’s better than trying to mirror a CRT TV.

The tuner works by having it connected to a coaxial antenna port on your wall while the antenna itself is outside, capturing signals.

Afterwards, run the HDMI cable to an amplifier. This device should then distribute the audio signal to any speakers you have while also running a separate video signal to your projector.

You want to have a stereo or soundbar available because usually, the internal speaker of your projector is inferior when it comes to giving you true surround sound quality.

If you lack an amp, you can link the tuner box to some speakers through audio cables and the audio out.

Usually, you need optical audio cables in particular while running the video separately via HDMI cable. This is for HDTV though.

If you’re using an older projector without an HDMI port, you’ll have to instead get some sort of A/V cable for audio and video, like S-video or composite RCA. 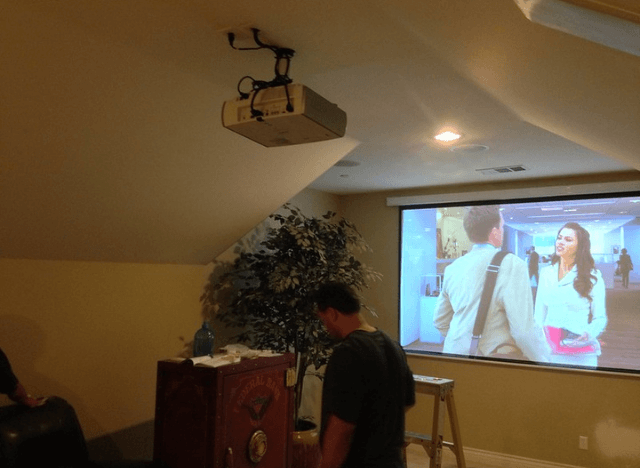 How to Connect a TV Antenna to a VGA Projector

Speaking of the VGA projector, you can avail of a VGA projector used for office presentation in order to display antenna broadcasts.

Naturally, cable television is easier since the broadcast is already wired. With antennas, it’s a little trickier.

When connecting an antenna to your projector, even a VGA one, you still need the digital TV converter box to serve as your projector broadcast TV tuner.

Your old-timey VGA projector should have an S-video port that broadcasts video only, so you need a separate connector for the audio.

Setting Up the Antenna on a VGA Projector

Turn both devices in a way that has their ports facing you so that plugging in the right cables is easier for you to handle. Plug the coaxial cable of the antenna into the “Antenna In” or “Coax In” port of the converter box.

If you’re using a composite cable, plug the yellow cable into the “Video Out” port of the converter box.

Plug the other end of the A/V cable into the “Video” port found on the back of the projector if it has one.

Otherwise, you’ll need an A/V to VGA converter. Take note that so far you’ve only covered the video portion of the connection.

Deal with the Audio Left and Right Connections

Meanwhile, the red composite cable should go to the “Audio Right” or “Audio R” ports of the converter box and the projector.

They’re supposed to cover the left and right stereo audio streams of the signal.

The Source Search Button is the Key

Now you can plug your projector and turn it on after all the connections are made. Why? It’s an old-fashioned projector that doesn’t have plug-and-play capabilities found in a more modern HDMI-type projector.

Activate the “Source Search” button on the projector’s remote control until the projector transmits the converter box’s splash screen, showing that the connection has successfully been established.

Open the Menu and Do a Channel Scan:

Push the “Menu” button on the remote control of the set-top box. Afterwards, select “Auto Scan”, “Channel Scan”, and so forth to make your TV tuner find channels.

You should then get the video of the broadcast TV, displaying it on-screen via projector like a cable feed. You should be able to change channels from one station to another after completing the scanning process.

How to Connect Cable TV to a VGA Projector

A VGA projector typically requires a cable TV converter box on top of the cable box available for your (likely CRT) TV.

Many modern projectors can easily hook up to your cable converter box with its “HDMI Out” port.

With older VGA projectors, it takes a bit of work or even an outright cable converter box specifically designed to work with it to allow the digital signal meant for the TV to be readable on a 1990s or 2000s model projection device.

Cable TV boxes weren’t a thing back in those days—you simply plugged the cable into the TV around that time.

Turn Off Before Connecting the Video Cables

Like with the TV antenna tuner box connection, your VGA projector should be turned off first then have both the box and the projector ports facing you.

They’re not plug-and-play like HDMI after all. They typically use coax cables and composite A/V connections. Again, plug the yellow composite cable into the video ports of the cable converter box and the projector

. If you’re using an S-video cable instead, go for the S-video ports. Use adapters/converters if you’re lacking certain ports.

Connect the Audio Cables Next

Turn It On Then Check If It’s Working

You can now turn both the projector and the cable converter on along with the default cable box.

Click the “Source Search” button of your projector remote control to have it recognize the cable connection.

You should see the cable converter box splash screen and menu on the screen if successful. Use the box’s remote control in order to change channels and whatnot.

You may also like: How to Connect Audio to Projector

Even though many people buy their projector units for use of movies and gaming, it’s entertaining to watch sports or the weather forecast on the big screen through broadcast TV.

Most projectors lack the built-in TV tuner needed to make an antenna work with the device. You have to buy this tuner yourself.

Furthermore, the tuner requires a connection to an antenna nearby or right on the roof, which might necessitate ceiling installation and loads of cabling.