If you wish your audience to focus on your presentation or video without seeing it on your laptop then that means you want to go into Projector Mode or Extend Desktop Mode. Activating either of those modes depends on the version of Windows or macOS you’re using.

There are also different ways you can toggle between modes. You either use shortcut keys from Windows or from the laptop. In regards to how to hide the computer screen on a projector, here’s the nitty-gritty.

How to Hide Your Computer Screen on Your Projector

If you’re doing a presentation, you usually default to duplicating or mirroring your laptop and projector screens via Duplicate Screen Mode. Some people find this distracting, so you can instead only turn on your projector only via Projector Mode. Access it through Windows Key + P.

However, if you don’t like Projector Mode but you still want to hide your computer screen, you can instead opt for Extend Display Mode. Here, the projector screen is a separate screen from your laptop screen. It’s the extended part of your computer desktop.

With macOS or Mac OS devices, Extend Mode is your best bet when it comes to hiding (part of) your PC screen from displaying on your projector screen.

Going through Projector Modes on Windows

Again, going to Projector Mode involves pressing the Windows Key then tapping the letter “P” Key.  It toggles you to several modes. One or two of them allow you to hide your computer screen from the projector.

Also known to users as Mirror Mode, it involves the projector mirroring what you’re seeing on the laptop screen. There’s only one screen shared or duplicated by both the projector and the laptop.

This can be used by both the projector and second (or third) monitor to increase screen real estate. It involves extending your laptop’s virtual desktop from multiple screens. You can hide your laptop screen by playing your video or slideshow on a separate projector screen “extension” this way.

This is when during either Duplicate Screen or Extend Display mode, you turn off the projector screen so that only the PC or laptop screen is visible. This allows you to 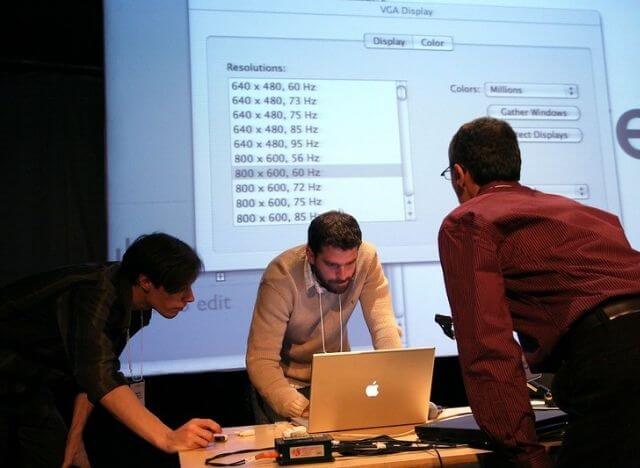 Extend Display Mode vs. Second Screen Only Mode on Windows

Whether you’re using Windows 10, 8, XP, Vista, 9x (98 and 95), and so forth, the typical method of hiding from your projector or “freezing” your screen like you have a pause button is by Extend Display. Extend Display separates the laptop screen from the projector screen.

The second monitor or display device serves as an extension of your virtual desktop so that you can play something on the projector screen while working on another thing on your laptop screen without disturbing the viewers watching your projection.

It’s through Extend Display that you can do things like simulating the “Freeze” screen feature found on projector remotes and the like. Meanwhile, Second Screen Only mode turns off your laptop screen while the projector screen keeps on playing.

Second Screen Only is handy if you want to only see your screen via laptop if you’re in Duplicate Screen Mode or Extend Display Mode. However, you can’t multitask with it.

You can access the different Projector Modes by hitting the combination of the Windows Key (the key with the Windows logo on it) and your “P” key on your keyboard. It’s all about pressing the Windows Key then tapping the “P” key, by the way.

You can also access the mode from the start through the system or display settings. Go to Display Settings and click Advanced Settings. You can choose the mode you wish to hide your laptop screen with from there.

Toggling between modes is the simpler solution, especially in modes where you can only see the menu on certain screens (PC Screen Only and Second Screen Only). Going to the settings is a good alternative in case you’re using an older Windows OS or it’s simply not working for whatever reason.

Your Laptop Fn Keys Might Also Go to Projector Mode

Another alternative to using Display Properties and the Windows Key + P shortcut is to use the Function (Fn) keys of your laptop itself. Those features bypass Windows and allow the hardware itself to toggle between Projector Modes instead of the OS.

Fn keys involve pressing the Fn button of your laptop and looking for the button with computer screen icons on them to toggle between display modes. This also allows you to shift from Projector Mode to Duplicate Screen mode if you’re stuck with a blank laptop screen accidentally.

Switching to Projector Mode in MacBook or macOS Devices

If you wish to hide your MacBook screen from your projector screen, do the following. This is the only way to toggle between screen modes in lieu of a similar Windows Key type shortcut on MacBooks and Macintosh laptops everywhere.

Click on the top-left corner Apple icon on your screen the choose System Preference, Displays, and the Arrangement tab. On the Mac Display Settings, you can pick between Mirror Display box, Extend Mode for secondary displays box, and so forth.

You want to check the Extend Mode box to get the Apple equivalent of Extend Display mode on Windows. This way, your Mac screen is separate from what’s playing on your projector screen, thus effectively hiding it from view.