The drywall on your wall or ceiling isn’t enough to support a heavy projector or even a 100-inch projector screen. You need to screw or bolt the support or mount for your screen on the ceiling joists from which the ceiling drywall hangs.

As for the wall, look for the solid parts of it to place your screen mount to ensure solid support.  Do you want to know more regarding how to mount a fixed projector screen on drywall? Keep on reading to find out.

How to Mount a Fixed Projector Screen on Drywall

When mounting a fixed projector screen on drywall, it’s about deciding whether it should be a wall mount or ceiling mount. In either instance, the drywall isn’t enough to support the hooks and bolts. You need to place them on joists or the solid timber supporting your wall or ceiling.

Predrilling is also called for to make it easier to put those hooks or anchors in versus drilling them into the joists almost immediately. Gradual, methodical drilling is the way to go.

You may also like: What’s the Best Way to Mount Projector?

Don’t install the projector screen over a window since it receives direct daylight. The ambient light robs the light from your projector itself. Don’t use the screen as a substitute for curtains. Don’t use them as blinds. The sunlight can damage the screen material compared to ordinary blinds.

Don’t forget that projectors produce the best images in a dim to dark environment. The faintest light shines brightest amidst the shadows while brighter ambient lights tend to swallow the light of projectors unless they produce light as bright as 3,000 ANSI lumens.

Your best bet is to place your screen and projector in a place where you can control the amount of ambient light around you via light switches, mood lighting, and curtains. 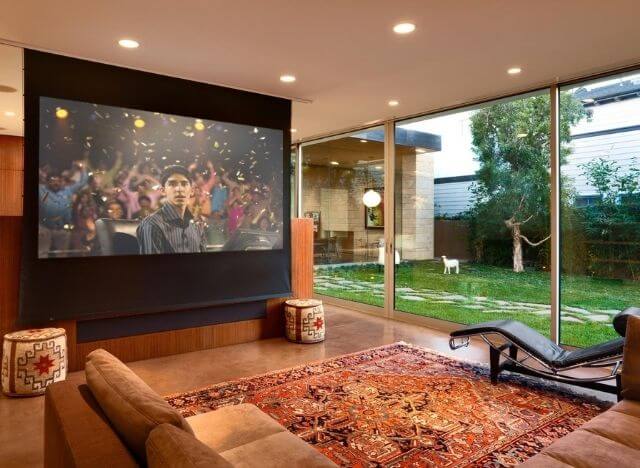 You can make the most of your home cinema or entertainment experience by adding a ceiling mount or wall mount for your projector screen. With that said, which mount should you go for?

Even if there’s a narrow window trim or picture frame below the screen, you should anchor the device about 1½-inches away from the wall on the ceiling.

You need to mark predrill holes by creating a template using a piece of cardboard. This is because the typical fixed projector screen weighs between 30 to 60 pounds. The template makes screen installation much more precise and easier all-in-all.

The template allows you to make sure that the predrilled holes for screws are evenly spaced from one another. They should also be evenly spaced away from the wall if you wish to extend the screen to bypass the aforementioned window trim or wall art.

A 3/16 drill bit is required for boring through tough drywall. This is a two-fold step—it’s best to predrill in order to make real screw installation accurate and easier down the line. It also helps you keep tabs on whether you’ll hit a ceiling stud or something.

If you aren’t able to determine whether or not a joist is being hit, unfold a metal wire hanger. Use that to poke into the predrilled holes. This will give you a better sense of where you’re drilling and whether you’re hitting the joist or not.

When installing something heavy like a projector screen, it’s best that you hit the studs or the joist. If you don’t hit any studs, then use anchor bolts. Alternatively, if you can access the ceiling joists through your home attic, then make a cross-brace.

The cross-brace can be built by attacking a perpendicular 2×4 board between the joists, under the insulation and where the predrilled holes are located. After installing the board, it should act similarly as the joist.

They serve as a solid place to attach your screen without worrying about the empty drywall crumbling from its weight. It serves as a solid space to hook and anchor your screen while distributing its weight in a balanced way.

Raise and Install the Screen

Get a second set of hands to install the heavy screen itself. Use three-step ladders or two-step stools beneath either set of predrilled holes. From there, have yourself and your partner lift the screen towards the ceiling.

Do so until the mount is flush with the ceiling. However, don’t over-tighten the screws.

Raise and Install the Projector Screen

Thread rope or string that was delivered with your screen unto the handle. This makes it more straightforward to reach the projector screen handle.

You also have the option to create a hooked end on the straightened metal hanger in order to prevent the string from dangling in front of your window or something. Now you can extend your handle reach freely.

When installing a projector screen, you should find a solid joist to drill your heavy-duty drywall anchors in. You also need to predrill through the drywall and into the joists to make the installation job easier down the line.

It’s worth it though because the home movie watching and gaming experience you can get from projector screens is more than worth it. Don’t forget to install your screen in an area in your home or office that’s easily viewable from your existing chairs and couches.