All modern projectors and television sets have a port or several enabling them to receive and display images instead of video. A computer-generated image, whether a digital photograph or something made through graphics programs, can be displayed on a projector.

It’s possible by making the projector mirror your laptop’s operating system screen or read the file like a computer would.  So regarding How to show pictures on a Projector—just keep on reading to find out.

Display Pictures from a Desktop or Laptop Computer on your projector

You can also use Google Chromecast in order to mirror, stream, or duplicate your computer screen, smartphone screen, or tablet screen onto your projector for good measure.

Showing Pictures on Projectors via Connections

The first step to showing pictures with your projector involves connecting your PC to it. The PC naturally shows pictures using various native or downloaded apps. The projector then acts as a monitor or screen for the PC for picture showcases or slideshows.

To connect your computer to your projector, find an identical port on both devices. Modern computers have an HDMI port that you can link to the HDMI port of the projector. Slightly less modern PCs from the 2000s to 2010s use the age-old VGA connection that’s been around since the 1980s and 1990s.

Get the Appropriate Cable

After identifying a matching port, you need to get an appropriate cable to connect them. Check the back of your projector to find the available connection ports and whether or not they can establish a link. Some ports, like for USB, is mainly for charging.

You may also like: Learn How to Connect to a Projector

The de facto A/V connection standard in the 21st Century all the way into the 2020s is High-Definition Media Interface (HDMI). HDMI is found in nearly all modern HDTVs and projectors as well as PCs. Most laptop computers have HDMI support since the late 2010s.

The Desktop PCs are Catching Up

It’s also becoming prevalent among desktops as well, even those that lack a high-end video or graphics card. It’s on the verge of replacing VGA, but VGA has been grandfathered into PCs. Therefore, you still see a lot of VGA ports on laptops and PCs along with HDMI.

The Standard for All Electronic Equipment

HDMI is currently the standard for all electronic equipment. It’s because the connection and its cable can carry both video and audio signals in one cable instead of multiple ones. VGA can only carry the video signal alone.

The Video Graphics Array (VGA) standard is a long-standing standard present since the 1987, introduced for the IBM PS/2 line of computers. A generic version of the connection became available among PC clones, thus leading to it becoming an A/V standard for computer monitors. 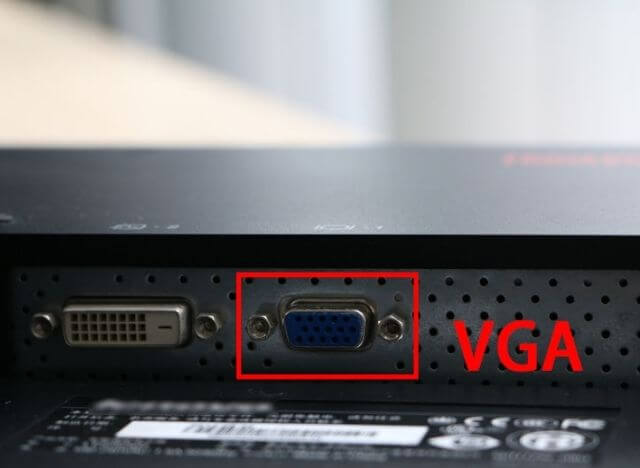 VGA used to be the most common connection port for both notebook and desktop PCs. Many projectors to this day still use it, especially business projectors used for slideshows and presentations. The VGA cable features a 15-pin connector on each end that plugs into a VGA port with 15 pinholes.

The Features of VGA

Because HDTVs don’t support VGA, HDMI is the recommended choice for a wider compatibility range. With projectors, you go either way with VGA or HDMI. VGA cabling is the same for all the devices that support it. The same cable can be used to connect PC monitors or projectors to the PC.

How About Apple Desktop or Laptop Computers?

If you’re using an Apple-branded laptop (MacBook) or desktop computers (Macintosh or Macs), you need a VGA adapter in order to connect your VGA cable to your projector.

Here are the other potential connections available aside from the HDMI and VGA standards you can use to connect your PC to your projector.

DVI is a newer standard compared to VGA but older than HDMI (and DisplayPort). Like VGA, it is video only initially but then incorporated audio and video in one cable in later versions. It’s supposed to be the successor to VGA but it got outlasted by VGA and VGA’s true successor, HDMI.

It offers a sharper image than VGA and matches the HD capabilities of the earliest HDMI versions. Even though DVI isn’t available in all projectors, it’s most likely to be found on a projector instead of a TV. It’s mainly a desktop and laptop PC monitor connection, just like VGA.

The composite video connection and s-video connection were the previous standards for CRT TVs and 1990s to 2000s projectors. However, they’re currently nigh-nonexistent on modern appliances. This connection type uses yellow female cables on what’s typically a three-cable bundle (RCA).

Last but not least is the Universal Serial Bus or USB standard. It isn’t used to connect a projector with a PC unless it’s the USB-C standard. USB is mostly for charging purposes. Or you might get one to read a USB flash drive at the most in order to feature pictures and photos as well as videos.

Both laptop and desktop computers can connect to a projector and use it to display their pictures the same way their default screens or computer monitors would. As long as you have the correct cables and ports, this shouldn’t be too much of a problem.

The sections above basically outlined how the projector can either link up to a PC, smartphone, or media player that could display pictures or serve as an image-displaying computer itself if it’s a smart projector.