Is it possible for a projector to play Netflix? How to use Netflix on a projector specifically? It’s pretty simple. Again, you can use the FireStick and Roku in order to turn your projector into a Netflix player. You can also link a phone or a laptop to the projector while they play Netflix in mirrored screens. Just make sure the linkage is allowed and not HDMI-CEC-protected.

Does Netflix work on projectors?

Yes. It works in several ways. Netflix was made to work originally on PC browsers, but when smartphones started becoming popular and more advanced, it became possible to watch Netflix on those too.  HDTVs can also connect to laptops, smartphones, or devices like Amazon Fire TV Stick or the Roku media player to make it possible to stream video using your Internet Wi-Fi. Certain smart TVs can directly work with the Netflix app as well.

It’s the same with projectors. Just open Netflix, sign in with your account, and then pick the movie or documentary or TV show you want to watch on the app while the project projects it on the big screen. You can do things like linking your projector to an HDTV with Roku connected to it or connect Roku directly to your projector. It can also work with any other device you can Streamcast or mirror their interface unto the projector as well.

See more: Can You Play Netflix through a Projector?

How to watch Netflix on a projector?

In regards to how to watch Netflix on your projector, you can go about it in multiple ways.

Even vintage LCD and DLP projectors that have VGA connections can be linked with a proper streaming device, be it a Roku media player, Amazon Fire TV Stick, an HDTV or smart TV, an iPhone, a Samsung Android phone, a MacBook, or a laptop/desktop PC. Just get the right converters for the media source to link with your VGA/AV projector, have separate audio cables and devices on standby, and voila. You’re good to go.

See more:  How to Connect Your iPhone to a Projector

Any projector with an HDMI port or even VGA/AV port (use a converter for those) can enjoy Netflix offerings as long as they can work with a streaming device such as Roku or FireStick. These devices can also play other streaming services like Amazon Prime, HBO Max, Disney+, CrunchyRoll, Hulu, and so forth. When all else fails, you can stream Netflix on your laptop or smartphone then mirror their screens on your projector.

Incidentally, most people prefer mini DLP projectors for viewing Netflix instead of full-blown bulky LCD projectors you can only use indoors. This must be because most people associate Netflix with smartphones more than HDTVs. Mini projectors are also more mobile and can be used practically anywhere you can bring a screen with you (unless you want to project on a wall), which goes hand-in-hand with Netflix streaming’s own viewing versatility.

You Also Like: The Best Mini Projector for Netflix

Using Netflix on a Projector FAQs

Here are the most frequently asked questions regarding using Netflix with your projector of choice. We’ve also included troubleshooting tips for good measure, just in case you’re having signal issues with viewing Netflix on your projector. 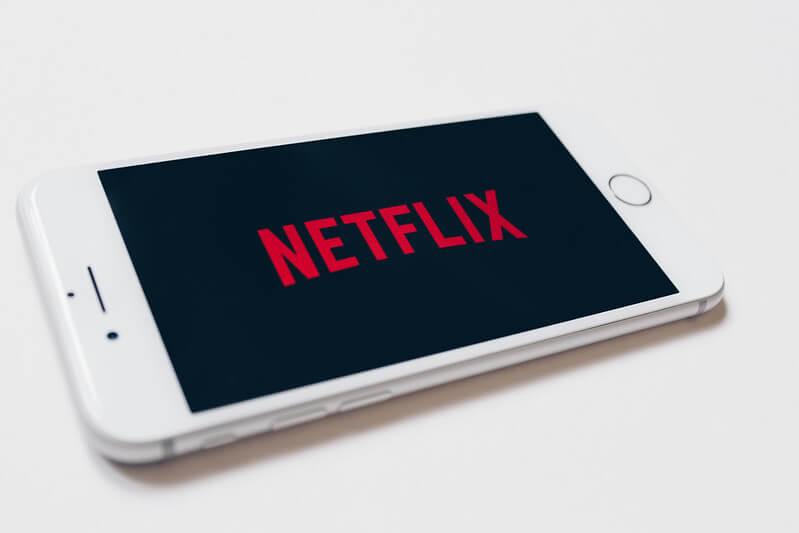 Otherwise, you can try out AnyCast instead, which works roughly the same way as Chromecast. For the Netflix 2nd Screen option, follow the same instructions of opening Netflix on both your phone/tablet and your projector unless your projector is a primitive one that can’t download its own apps. If that’s the case, then getting a USB-C to HDMI/VGA converter or adapter cable is the way to go.

If it’s vice-versa, get an HDMI to VGA converter or even an HDMI splitter that splits the signal to separate VGA and audio cable ports. You can choose the projector on the display settings as your display device of choice. You can now stream your Netflix freely from your computer since the projector is now merely acting as its monitor with no further (hopefully) HDMI CEC issues as long as your cables and adapters are recognized as valid. Otherwise, you can use Chromecast to Streamcast Netflix directly to your projector.

In essence, to make Netflix work, you simply need to open your Chrome browser and do a Chromecast on your Mac or MacBook to mirror the screen. Otherwise, you can instead try out Netflix 2nd Screen, but it requires you to have a projector that acts like a computer or mobile phone itself, complete with OS and the ability to open the Netflix app. You might also need to configure the projector and/or the computer to recognize each other by cable link or by wireless transceiver/receiver.

Yes, mini projectors are more likely than not short-throw projectors as well as DLP projectors. It’s all due to their smallness—it’s more practical to reduce their throw distance to almost in front of the screen than to make them long-throw in light of their size. Regardless, the main appeal of using a mini projector for your Netflix viewing is the ability to make any nearby wall or flat surface into a screen, such that you can watch Netflix on the go or when camping.

It has Wi-Fi capabilities and it’s Netflix-ready. It easily recognizes Roku or FireStick devices. It can also run Netflix through any smartphone or tablet made by Apple, Samsung, and so forth. It can stream Netflix movies through any iOS, Android, or Windows device. You can use Chromecast to broadcast Netflix on it to boot. Netflix is accessible to CINEMOOD in various ways.

If you want a portable DLP projector instead, the PIQO Projector is a nice, pocket-sized HD projector capable of 1080p resolution images and works with 200 lumens. If you instead wish for more bang for your buck while maintaining portability, then you won’t go wrong with an affordable 480p APEMAN projector or the HD Erisan projector that has an Android operating system that allows the download of the Netflix app into its hard drive.

When we say “smart”, we mean a device that’s practically a computer. A smartphone like the iPhone or any Android device can do more than just make phone calls using a portable device. They can communicate with other devices or use Wi-Fi to make Internet connections as well as run applications. It’s the same with the smart TV, which is what most modern HDTVs are. They can also run programs like your laptop or desktop. A smart projector belongs to that class of device.

If it’s an HDMI connection, open Opera, Firefox, or Chrome to access Netflix while projecting. Connect the projector Then start Netflix. Use your projector as a screen mirror and see if that allows you to access Netflix. If the problem persists, it might be your HDMI cable or HDMI to A/V converter that’s giving you issues instead (like if it’s a poorly made or damaged unit).

Everything should move smoothly unless you were to hit a snag with HDMI-CEC (the anti-digital piracy feature of HDMI that allows devices to communicate with each other) and permissions to run the mirrored screen on your projector. You should have the proper connections, certifications, and handshakes (don’t buy pirated converters or splitters) in order to allow your iPhone to play Netflix on the big screen.

If it’s a wired problem, it might be because your HDMI cable or converter is frayed or damaged. The connector might have bent pins or there might be a kink on its cable. Otherwise, you can come across this black screen issue if you don’t have the latest version of the Netflix app installed. You can, therefore, correct this by installing the latest app.

The home video market for VHS, DVD, and Blu-ray Discs (BD) was arguably killed by Netflix, an Internet streaming service that used to deliver DVDs and BDs by online mail-order but is most known for its online streaming of TV shows and movies that blew up and made the company into a billion-dollar streaming empire.

Anyone can get a Netflix account and make it play on their phone or computer as well as HDTV using devices like Roku or Amazon Fire TV Stick. Regardless, when it comes to the question “How to use Netflix on a projector?”, it’s either you hook it up to a device that can play Netflix like a laptop or cellphone then mirror their screen, download Netflix directly on the projector if it’s a smart projector, or hook up a Roku or FireStick onto it if it can accept such devices.