Aspect ratio doesn’t only apply to projectors but also for TV sets or computer monitors. It refers to the ratio between the height and width of the resolution or screen. For instance, a 4:3 display produces a square image. A 16:9 ratio produces a more rectangular shape. In regards to your Projector Aspect Ratio, even if you’re dealing with bigger screens you’ll still be mostly working with the same aspect ratios of 16:9 or 16:10.

The reason for this is because the 4:3 square ratio is an outdated one and most movies and TV shows in the 21st Century are all high-definition or HD.  Regardless, the three most common video projector aspect ratios are 4:3, 16:10, and 16:9. Learn more about this topic below. 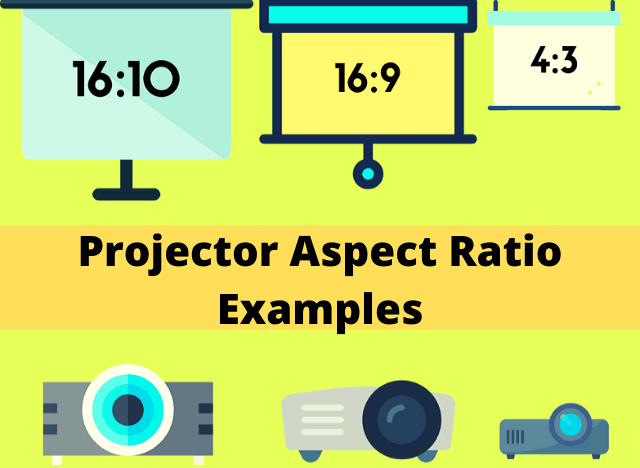 The resolution of your projector is directly tied to the aspect ratio. For example, vintage SVGA projectors for old-school CRT televisions and 1990s computers will have a 4:3 aspect ratio for the 800 x 600 resolution. Ditto with HD 720p or 1080p projectors that are intrinsically linked to the 16:9 aspect ratio.

From there, the high-definition or HD era of DVDs and Blu-Rays came about, leading to HDTV and its 16:9 aspect ratio around the Turn of the Millennium or the 21st Century. This will further expand in the 2010s with the advent of 4K or 8K entertainment that has a 1.9:1 or 19:10 aspect ratio. At any rate, here are some of the examples of aspect ratio variants across the board, from computer screens to TV screens.

The most common home theater video projector aspect ratios include the following.

The different types of home theater and business projectors were touched upon on the earlier entries. With that in mind, what are these two types of projectors anyway? You can figure it out by the way they’re named. To wit:

Meanwhile, here are the different home theater projectors and their respective aspect ratios.

By the way, the “p” on 1080p and the “i” on 1080i refer to “progressive scan” and “interlaced” encoding formats respectively. Interlaced scanning displays alternating sets of lines and is mostly seen on TV screens. Progressive video scans are the norm for HD video while interlaced scans are more of a relic of CRT TV broadcasts.

As for the different types of business projectors, they’re listed below with their respective aspect ratios and resolutions.

What The Projector Aspect Ratio Brings to the Table

Certain aspect ratios are close enough to one another that you can’t tell the difference when they’re displayed back to back. Other aspect ratios result in letterboxing or black bars on either side of the video when displayed on a screen with a different aspect ratio to account for the extra screen real estate. At any rate, when shopping for a home cinema projector, you should know both the aspect ratio and the (native) resolution of your projector to get the right projector screen or wall-size for it to make its square or rectangular display.