The digital video projector nowadays is significantly different from the overhead and slide projectors of yesteryear. They’ve even replaced commercial film projectors because of their technological advantages to those old film reels. The 21st Century projector is all digital and has connections ranging from composite A/V and VGA for the 1990s and HDMI in the 2000s. You can even connect your laptop or desktop PC to your projector, especially if it’s a business projector made for projecting presentations. USB got OEM support from OSR 2.1 and Microsoft Windows 95 for devices made with the standard included in August 1997.

So can you plug a flash drive into a projector? Long story short, yes. Or at least most modern projectors should have a USB port available that can read the contents of a USB flash drive or thumb drive. Some projectors use the USB port to charge or power on a device though. Check if your projector of choice can read flash drive media or not before purchasing.

What Is USB and Its History?

USB stands for Universal Serial Bus. It’s the current industry standard connection for hardware you’re supposed to connect to your PC. It eventually ended up being connectors to other appliances such as HDTVs, cameras, printers, scanners, tablets, smartphones, and the like. It establishes specifications for connectors and cables as well as connection protocols for power supply interfaces and communication between computers, peripherals, and handheld devices.

Connecting a USB Device to The Projector

Certain projectors were made with USB devices in mind, not just flash or thumb drives. This naturally includes hardware that works with USB such as external hard drives and digital cameras. You can connect your flash drive in particular to the projector’s USB Type-A port. This will give the display device access to the files in the drive and play or project it. Usually, this includes certain movie files but it can also include pictures and sound files. 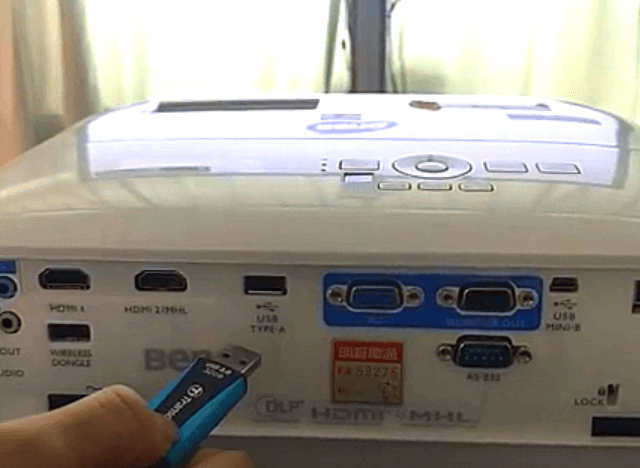 The Goals and Benefits of USB

Before USB, PC users had to deal with a multitude of connectors and forced to cater to certain first-party hardware producers because getting cheaper but incompatible hardware from other companies is a waste of money if they don’t have the ports or cards for them. The dawn of USB addressed the usability issues of interfaces that existed at the time. This furthermore simplified the software configuration of all the devices when connected to the USB standard ports and cables. This also permits external devices to have greater data rates when compared to older propriety connection standards.