A projector is great when it comes to larger-than-life projections or video images you can see on screens much bigger than what the biggest HDTVs can over. However, what about the OLED TV? How does it compare to a projector in terms of size and image quality?

Keep on reading to find out the lowdown regarding the Projector Vs. OLED debate.

What is a Projector?

Everyone knows what a projector is, right? However, to those who have lived under a rock for the past century or two, it’s an optical device capable of projecting images or videos onto a surface such as a wall or a screen. During the early days, it was known as a magic lantern. 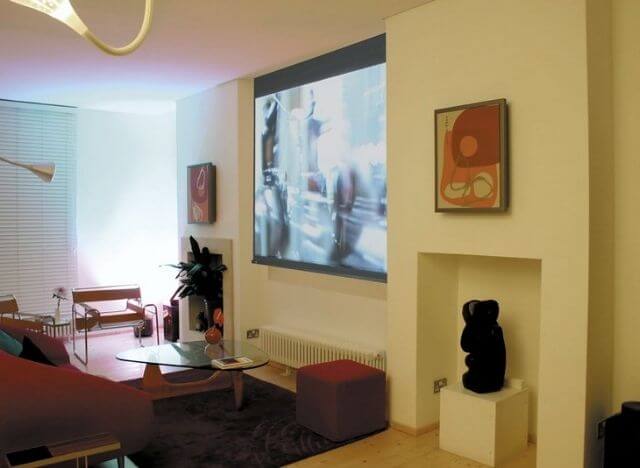 The home theater or business image projector is specifically the type of projector being discussed in this article. These projectors are fast becoming the alternative to the TV and computer monitor when it comes to viewing games or videos.

A projector remains your best bet when it comes to projecting videos, games, or slideshows for a wider audience than a small family or a solo user.

An OLED is a type of television. Television was originally developed as the alternative to theaters and films or “movies”. You can buy a television or TV set in order to bring the excitement of movie theaters to the comfort of your own home.

However, OLED isn’t just a throwaway type of TV with little difference to LCD or LED models. They’re not obsolete models like the plasma TV. OLED might actually become the future of TV, with projectors serving as their alternate competition aside from the current flatscreen standard.

OLEDs can produce both color and light from one single diode when fed power or electricity. Every self-contained pixel serves as a light and color source. What this means is that OLED TVs don’t need a separate backlight. Every pixel serves as its own light.

OLED is a tech that’s also available for PC monitors for good measure, which is the same case with LED or LCD flatscreens.

You may also like: Projector Specifications Explained &#8211; The Ultimate Guide to Projectors

All projectors shine light through a small transparent lens in order to blow up an image or series of images to surfaces like screens as big as 100 inches or more. Most have used lamps as their light source while others have used Light Emitting Diodes (LEDs) or outright lasers.

Meanwhile, the brightness of an OLED TV or monitor depends more on pixels and its Organic Light Emitting Diode (OLED), hence the name of the technology. Long story short, these flatscreen TVs are made to be more effective than ordinary LED or LCD flatscreen models.

Yes, OLED technology is the future of flatscreen TVs and monitors. However, how do they compare to projectors? They’re more or less the same as any other monitor in that regard. Again, it depends on what you’re using them for.

Largeness is What Makes Projectors Better

Sure, their use of carbon-based organic compounds makes them more economical to create. However, in size terms or for a viewing audience of more than 5-10 people, a projector remains the more cost-effective choice for live viewings of PPVs or marathoning the Harry Potter series.

You just have to deal with annoyances like closing the curtains or blinds as well as limiting ambient light to get a clearer picture or image out of your projector.

Practicality is What Makes OLED Better

However, for anything else, OLED, LED, or LCD flatscreens will remain king. You don’t necessarily need an excessively large screen or image in order to view every last pixel available on an Ultra HD video. For that matter, Full HD is enough if you’re just viewing on a decent-sized flatscreen OLED.

Your OLED TV will last longer than your projector for marathon viewings for sure. It’s also impractical to use a projector to play a game of Minesweeper, do your taxes on Microsoft Excel, or write up your report on Microsoft Word.

You can use your projector to preview your PowerPoint Presentation slideshow or when video editing, but a laptop screen or OLED monitor is enough otherwise. Sometimes, bigger isn’t necessarily better.

What You Need to Find Out

As far as the digital video projector is concerned, it compares to OLED-tech TVs the same way HDTVs in general compare to the video projector. Projectors beat out TVs in various aspects, from size to fulfilling the image quality potential of a pixel-dense resolution (anything from Ultra HD and onwards).

However, OLED TVs do make up for this deficit in their own way, like solo or small family viewing, ability to work for more than 4 hours daily, and individual pixel brightness that’s even superior to the latest LCD flatscreens.