With that said, what’s QHD? What’s WQHD? How do they relate to HD? In terms of QHD vs WQHD: Is WQHD better than QHD?

1440p and QHD are also known collectively as 2K resolution (as opposed to the more popular 4K resolution for Ultra HD). Just remember that even though QHD and WQHD have been used interchangeably, they’re not the same.

They both fall under 2K and 1440p, but WQHD is a little different. The next section should help explain exactly why they differ from one another. 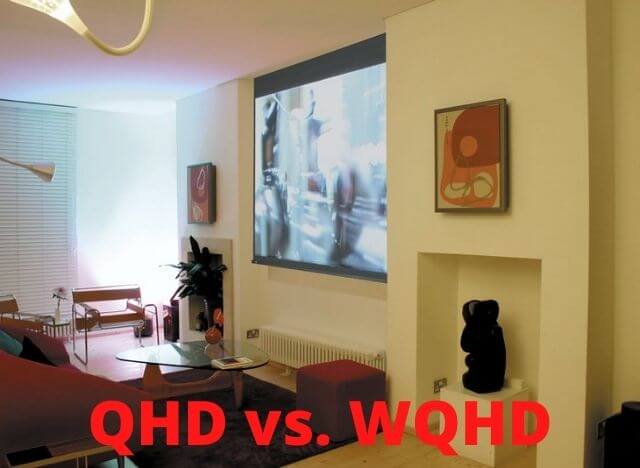 The most common display resolutions are as follows.

WQHD is the widescreen version of QHD.  That’s it.

As explained in the chart above, WQHD also belongs under the 1440p or 2K umbrella. However, it’s a little bigger—or rather, wider—than QHD.  WQHD and QHD represent the same resolution of 1440p, but UW 1440p is slightly wider for use in the widescreen.

Watch out for vendors advertising ultra-wide monitors as WQHD even though they lack 2,560 horizontal pixels. Some might automatically claims something is WQHD simply because it has more horizontal pixels than QHD (but only slightly) to fit the 16:9 aspect ratio.

The wider version of a resolution had been done before with UW 1080p or WFHD (Wide FHD), which is the ultra-wide (or slightly wider) version of standard Full HD or 1080p.

The difference between QHD and WQHD is 880 pixels and use for widescreens or the 16:9 aspect ratio without stretching the image or having black bars on the side. They’re the same resolution, with WQHD created for use with widescreens.

Everything else, from benefits to drawbacks, they share together. They share the same vertical pixels or height, with WQHD being slightly wider of the two. Before 4K to 10K came along, 1440p or 2K was the only improvement to Full HD or 1080p, and many people—mostly gamers—flocked towards it.

Barely Any Difference between QHD and WQHD

Yes, the extra pixels of the WQHD matter for widescreen since every pixel counts in gaming or in 1440p video. What’s the point of going widescreen if you don’t take advantage of the extra pixels? However, functionally, WQHD is still 2K or 1440p.

However, ultimately, 4K and above offer more image clarity and future-proofing compared to the quickly obsolete 2K resolution. Ironically, 1080p is still hanging on even in 2021!

Do the Extra Pixels Make the Difference?

Kind of? Speaking from experience, 4K is kind of overkill. At that pixel density (we’re talking pixels per inch here), nothing short of blackboard-sized ultra-wide monitors worthy of conference halls will show you the difference in sharpness.

At regular monitor size or laptop screen size (anything under 50 inches), the differences between 720p, 1080p, and 1440p is more apparent. Ironically, a 4K monitor and a 1080p monitor of the same size under 15 inches look the same because the pixels of the 4K monitor requires more space to “breathe”.

The full potential of 4K can only be touched upon when we reach cinematic levels of screen sizes in the future. Otherwise, going 10K and beyond truly is excessive.

QHD and WQHD are the same resolutions except WQHD is 880 horizontal pixels wider or “thicker” than its QHD counterpart. This makes it more ideal for widescreen use at a 16:9 aspect ratio. However, let it be known that QHD resolution won’t look boxy or stretched out at 16:9 either.

It’s just that WQHD offers enough extra real estate to fit widescreens slightly better than QHD. Aside from all that, the difference between the two is minuscule at best.