When choosing between a projector versus a television, eye health should be a major consideration. Which of these devices are more damaging to your eye? This is on top of the other respective pros and cons of buying a TV over a projector or a projector over a TV. TVs nowadays are available in high-definition and flat screens, so they’re otherwise known as flatscreen HDTVs. They’re much larger in screen size but more space-efficient than their bulky CRT (cathode ray tube) TV counterparts that used to be as big as a closet or a treasure chest back in the day.

However, even the largest HDTV can’t compete against the largeness that’s possible with a projector and screen, which can go from 100 inches in height and much higher depending on how much room you have to spare in your home or even your backyard if you’re using an inflatable screen. Cost-wise, projectors are pound-for-pound much cheaper than HDTVs of the same maximum screen size.

How Safe Are Projectors versus TVs?

With that said, which is safer? A projector or an HDTV? TV screens produce eye-damaging direct blue light while a projector’s indirect blue light is much gentler on eyes since you’re seeing that light projected second hand on a screen. It’s like the difference in brightness between the sun and the moon, which is merely reflecting the light of the sun. There are also several other safety features available on projectors that make it the safer, eye-friendlier option compared to the more mainstream HDTV. To wit: 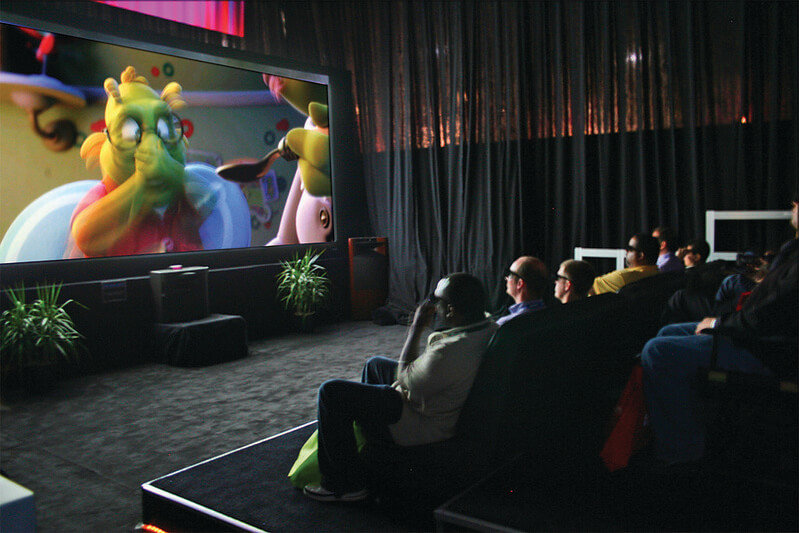 The indirect blue light of a projector is much safer than the direct blue light of a television set. On that note, a projector can be quite bad for your eyes if you don’t follow safety precautions and common sense. Never directly look at the lens of a projector that’s turned on. To do so can damage or blind your eye more than looking at the screen of an HDTV. However, looking at the image or projection of a projector is perfectly fine and gentle on your eyes. Then again, cumulative damage to your eyes can happen when you look at any screen, even projection screens, for most of the day. Make sure to rest your eyes when doing movie marathons and the like.