For some, camping is all about going to the great outdoors in order to rough it out. For others, they instead want to undergo what’s known as glamping or glamour camping, where they can go camping in the wilderness but they have all the luxuries in the world with them. If you have young kids, it’s likely for them to end up bored if they don’t have a TV show or movie to watch. You might get bored yourself if you’ve roughed it before and wish for some modern entertainment in the middle of making a fire or setting up a tent.

Did you know you can camp out and watch movies for a wide audience while camping? It’s all possible with the assistance of a mini projector. A mini projector, by the way, is a great way for you to entertain yourself even while camping. Just make sure to bring a USB full of movies or a mobile Internet connection for Netflix streaming and a screen, and you’re all set!

What to Look for in a Mini Projector for Camping

Not everyone wants to rough it outdoors with camping. You can go glamping in style with the right mini projector, such as the Vankyo Leisure 3 Projector. With that in mind, here are the hallmarks of an excellent mini projector for camping that you should be on the lookout for that incidentally coincides with the offerings of Vankyo Leisure 3. It’s tough, it can be used outdoors, it’s bright enough to shine in ambient light or low-lighting conditions, and it’s pretty portable with a long-lasting battery.

How Vankyo Compared to Other Mini Projectors

Below are some recommended portable projectors to use for camping and how Vankyo Leisure 3 compares to them. To be more specific, their hallmarks of excellence will be discussed, followed by how Vankyo also has such properties or features included with its own camping projector offering. Vankyo is our chosen one because it seemingly has the best aspects of all other camping projectors.

Additionally, InFocus offers 640 lumens of brightness in its brightness mode, which works excellently for a portable model or when dealing with ambient light in camps like the campfire. However, it lacks battery options so you need t connect InFocus to a power source. Vankyo actually is portable and has a strong, long-lasting battery though as well as brightness to match.

However, the AAXA HD more than makes up for it with its ability to fit into a tent that you can use as your dark room or theater to watch whatever you want. Its minimum throw distance is 17 inches and it has a decently large image size comparable to a medium-sized flatscreen. It also includes a 2-hour lifespan from an embedded lithium-ion battery. Alas, it doesn’t have the connectivity of other projectors because it lacks the ability to link to Bluetooth or Wi-Fi devices.

Meanwhile, the Vankyo Leisure 3 is the size of a small laptop, allowing you to bring it along anywhere you want in its suitcase or carrying case. Just be careful not to drop it. You can carry it anywhere flat that you can project an image unto, from your tent to your handy screen. It also comes with a remote, cables, and extra space on the case. It’s about 100 bucks as well.

What The Vankyo Leisure 3 Brings to The Table

Let’s now discuss what Vankyo Leisure 3 brings to the table. In a nutshell, it’s portable, lightweight, powerfully bright, has a myriad of connections, and can do multiple screen sizes depending on how near or far it is to the screen (throw distance). Let’s now dissect why it’s the best mini camping projector possible for your glamping needs. 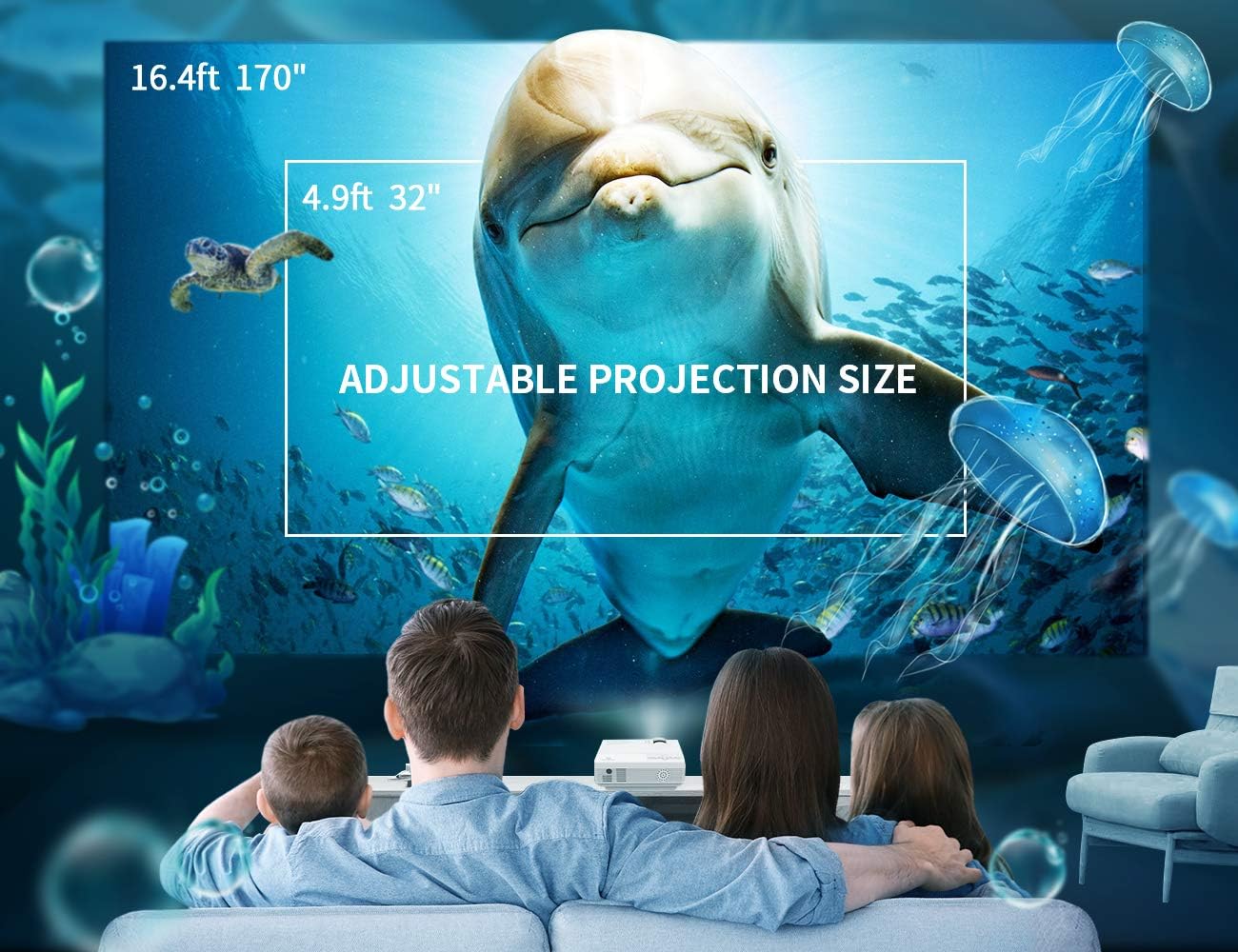 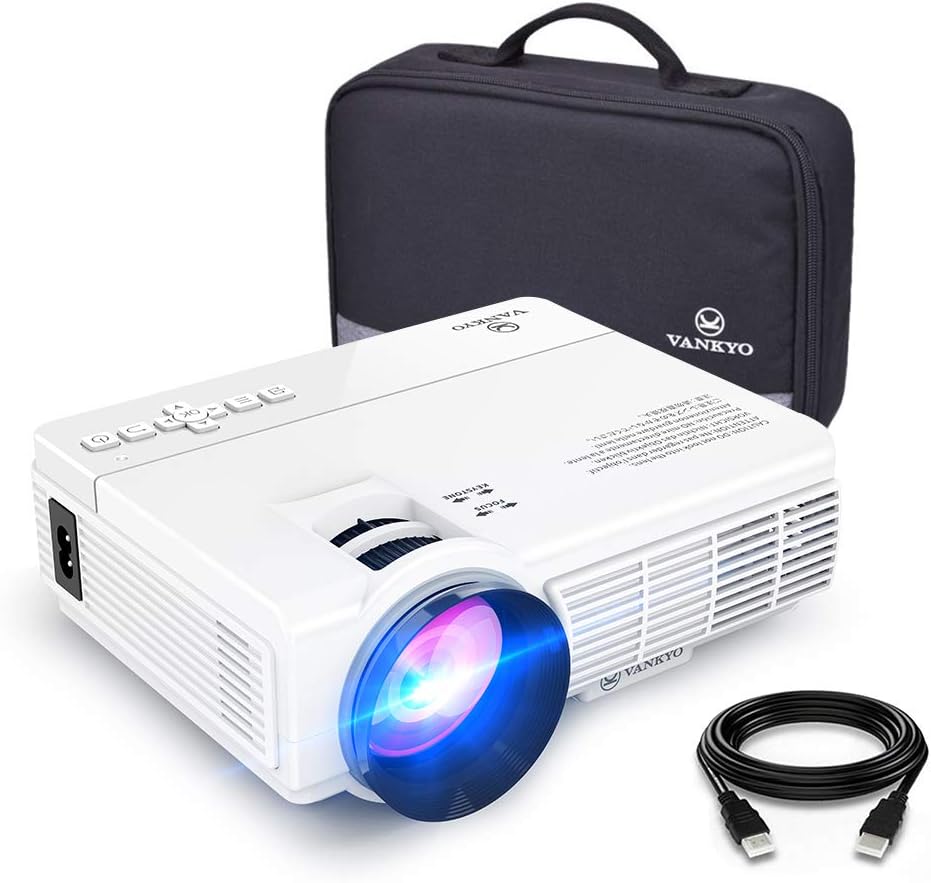 The Vankyo projector advertised in this guide is the best among the collection of camping projectors here because it’s a good balance of projector quality and portability as well as battery life. The others were more lacking in one or two departments, even though they excelled in the rest. You also don’t need a projector that’s too small or else you might as well just watch your movies on your smartphone or laptop. This projector is the salt that will add flavor to your camping experience steak when all is said and done.

It simply gives you more bang for your buck with its brightness, its serviceable native resolution, its LED modulation, its dynamic iris that adjusts zooming and clarity dependent on the lighting conditions around you, and its small footprint as a portable device. The whole point of having a projector is to simulate the movie theater or even home cinema experience in the great outdoors, whether you have to do it on a screen, tarp, towel, blanket, or the side of your tent. In terms of glamping, the Vankyo Leisure 3 is a must because it’s the most high-quality yet cost-effective option you have when it comes to movie projection in trailer parks, national parks, forested campsites, or pure wilderness.