Netflix has arguably killed the home video market as well as the DVD and BD market in one fell swoop. Originally an online-based DVD delivery company, Netflix took one look into the digital piracy and illegal streaming scene, realized the billions of dollars that copyright holders are losing from such shenanigans, and decided to get into the business of offering a legal alternative to DVD rips for torrent and pirated streaming sites. Since then, Netflix has grown into a billion-dollar service.

Soon, Netflix became the de facto name when it came to streaming digital video content from Hollywood, South Korea, Japan, Bollywood, and elsewhere. Regardless, if you wish to watch Netflix anytime and anywhere, you won’t go wrong with the CINEMOOD Portable Movie Theater.

What Should You Look for in a Netflix-Dedicated Mini Projector?

Netflix is the preferred method of watching movies and TV shows because of its convenience. They’re almost as convenient as the pirated digital copyrighted content of before, only this time they’re legal and you can avail of them for about $10 or so per month. They’re more convenient than buying and storing VHS tapes or Blu-Ray discs of movies for later viewing.

With that in mind, what makes CINEMOOD stand out of all other projectors capable of running Netflix? Theoretically, any projector will do. Most 21st Century projectors have Wi-Fi capabilities or are online-streaming-ready. Otherwise, you can always plug in an Amazon FireStick or Roku device on it to make Netflix available for it despite a lack of Wi-Fi connectivity. To wit: 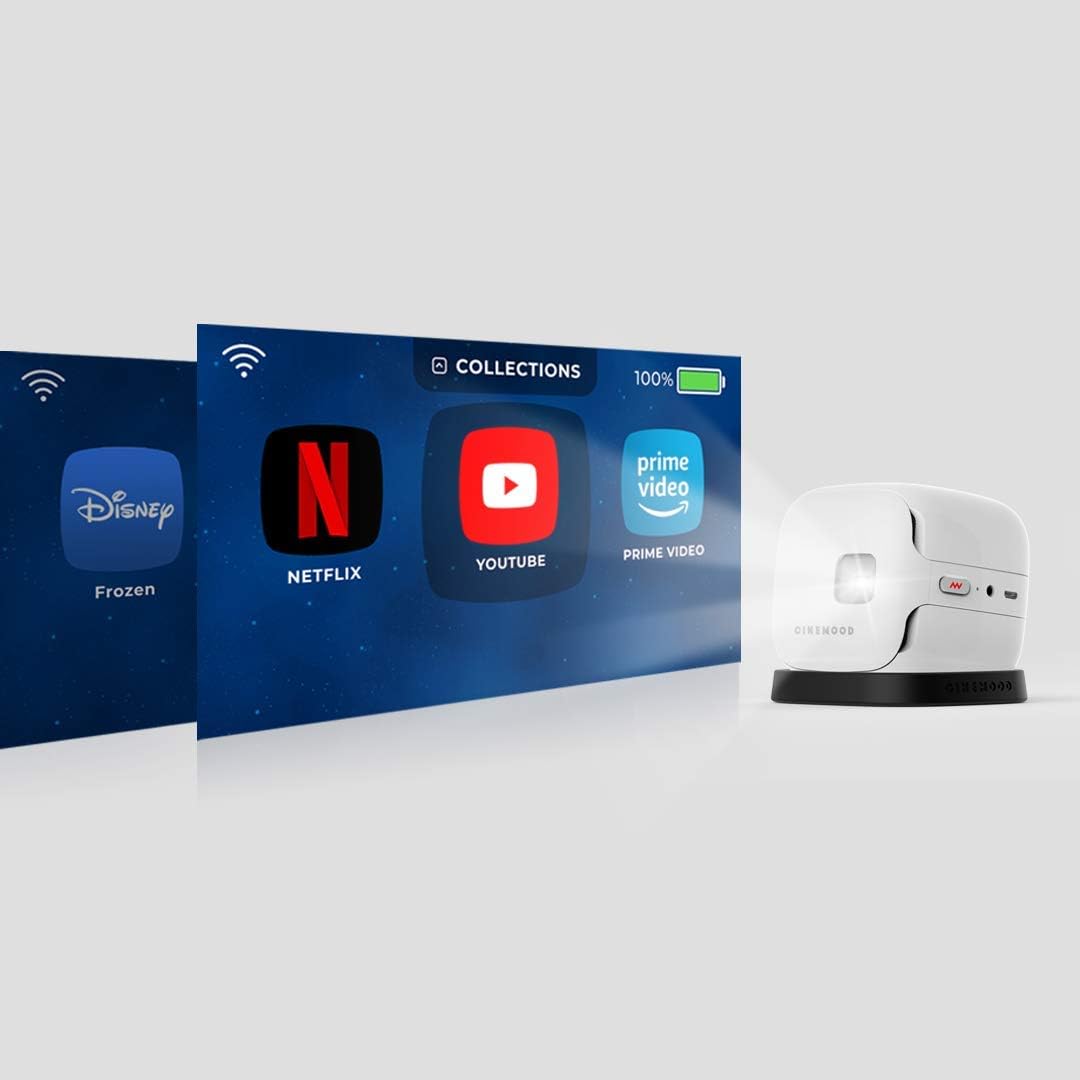 The Spartan projector might not have a sleek look or use lasers to project 4K resolution images. However, it does provide a killer image for its price point. It’s also a worthwhile buy for your Netflix-binging needs because it’s not a pain to setup. In regards to setup convenience, it’s right up there with CINEMOOD. It also comes with a universal mount and a Silver Ticket screen, you’re getting an extra 200 bucks in value for all your needs when it comes to doing a Lord of the Rings trilogy or Harry Potter movie marathon.

It’s as portable as CINEMOOD though, with it being about the size of a Coke can. It’s the perfect mobile or handheld projector for movie-viewing during camping as long as it’s done at night instead of the daytime. You can also project it on the tent walls or a bedsheet instead of a screen for good measure. Its battery lasts for four hours of operating time, which is as impressive as most laptops. It also comes with a built-in speaker. It’s also easy to set up to boot. It’s recommended though that you get an aux cord and speaker for it.

The reason why it’s expensive is that it can sit directly in front of a screen and beam a massive image. It doesn’t require mounts, wires on the ceiling, or any other paraphernalia. It’s much bigger than CINEMOOD, though. It’s the size of two shoeboxes. It makes up its expensiveness with its convenience. It’s considered a plug-and-play cinema because it can connect with anything that has an HDMI, USB, or AV connection. It’s also quite expensive because it has Epson-quality 4K resolution, good blacks, striking colors, and vibrant contrast. The image quality is jaw-dropping, to say the least.

Finally, another Optoma projector model—UHD60—is available for your Netflix viewing pleasure because it offers a 4K resolution projection for under $2,000. It was actually one of the few projectors to be 4K without costing $4K. It’s about 6 times the cost of a CiNEMOOD but the fact that it’s a 4K projector makes it amazing than it doesn’t cost 10 times more instead. It has double the size of a 65-inch HDTV, with every pixel added ensuring you crystal-clear quality, detail, and fidelity, especially when you’re viewing 4K movies at 60 Fps, like in the case of The Hobbit Trilogy. How can the CINEMOOD compete with such quality? Through utility that truly takes advantage of the convenience of Netflix!

What Does CINEMOOD Bring to The Table?

The CINEMOOD Portable Movie Theater is our top pick for a portable or mini projector for Netflix viewing because unlike the other projectors on this guide, it’s made specifically to optimize your Netflix or online streaming experience. It’s the one truly Netflix-dedicated or streaming-dedicated powerhouse of a compact mini projector. All the other projectors treated their Netflix compatibility as a tertiary selling point.

CINEMOOD is a portable movie theater you can fit on the palm of your hand because it mostly uses Netflix as its main library of movies to show. It can also stream or project YouTube, Amazon Prime, Disney+ and more for good measure anytime and anywhere (that you have Internet). To wit: 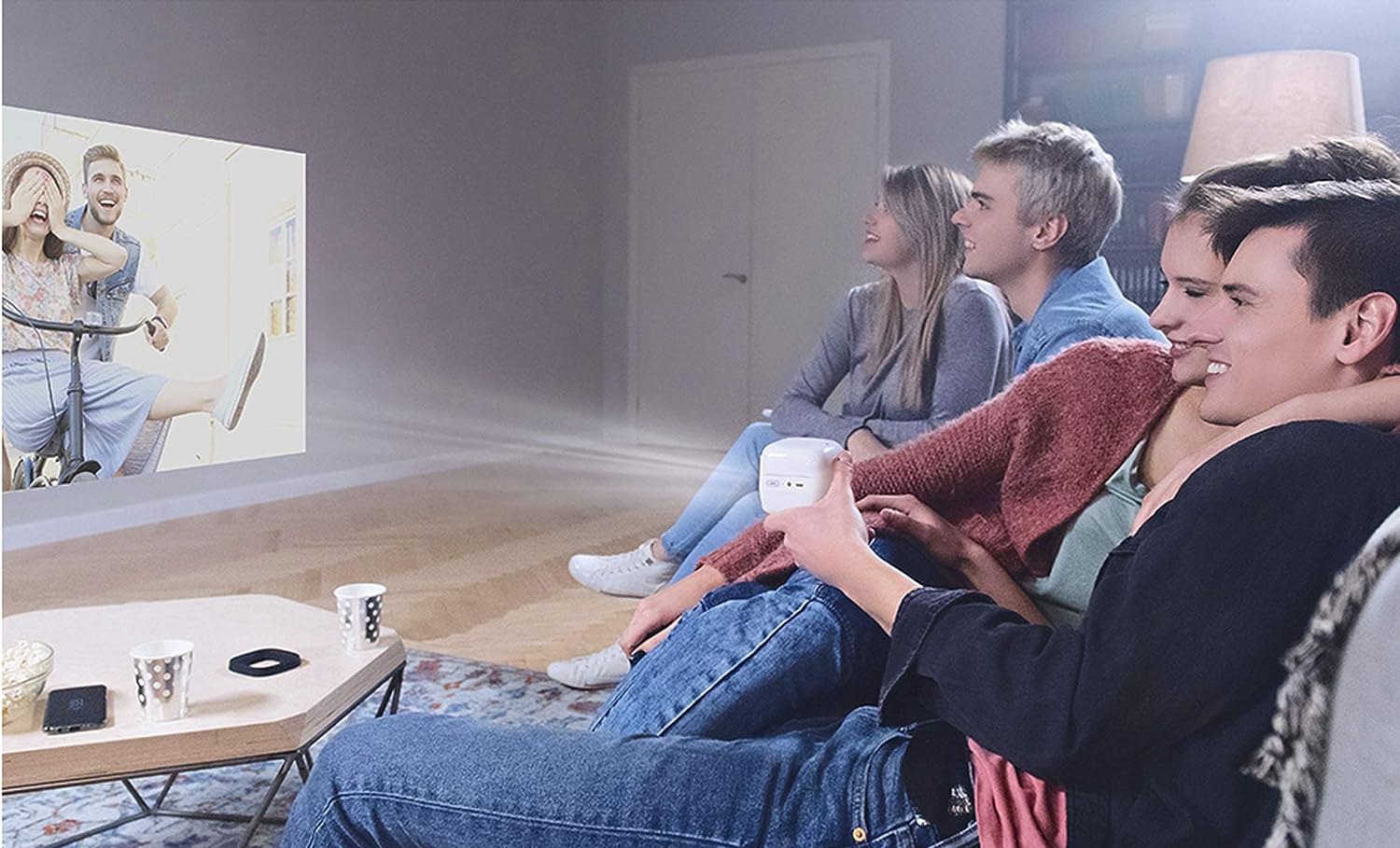 The Verdict Regarding CINEMOOD

Netflix got into agreements with multiple copyright holders to stream their content through them. With the combined efforts of the Digital Copyright Millennium Act (DMCA) putting down pirate sites like MegaUpload and Pirate Bay, YouTube instating the Content ID defense against users uploading content they don’t own, and copyright holders publishing their content for streaming on Netflix, and the company soon blew up to epic proportions.

At any rate, even with the rise of other streaming services like longtime competitor Hulu, Amazon Prime, Disney+, CrunchyRoll, and so forth, Netflix remains the king of the hill. As far as a portable Netflix portable projector goes, CINEMOOD is the cream of the crop if not the best of the best altogether. It helps that it was specifically made and designed with Netflix streaming in mind. It’s the size of a small speaker but with it, you can watch movies from all sorts of genres and studios with the same convenience you’ve come to expect from Netflix itself.