A standard projector has a throw distance (distance between projector and screen or surface) that requires you to move your projector at the back of your room or at your ceiling in order to project a large enough image for viewing. Its throw range can range from the size of a whole theater to the length of a room. This is because, at merely 5 feet or less (short throw projector range), the image is too small or no smaller than the size of a TV screen. Speaking of which, a short-throw projector can get you a huge-sized image or projection at 5 feet or below.

An ultra-short-throw (UST) projector has an even smaller throw distance than that yet can produce the hugest of projections or images for your home entertainment, movie-viewing, show-marathoning, or video-gaming needs.

Things to Consider Before Buying

Before buying your own ultra-short-throw projector, you need to know what it is, what it offers, and what features to watch out for in order to maximize your future investment. This projector type is handy for presentations on the go and mobile entertainment. 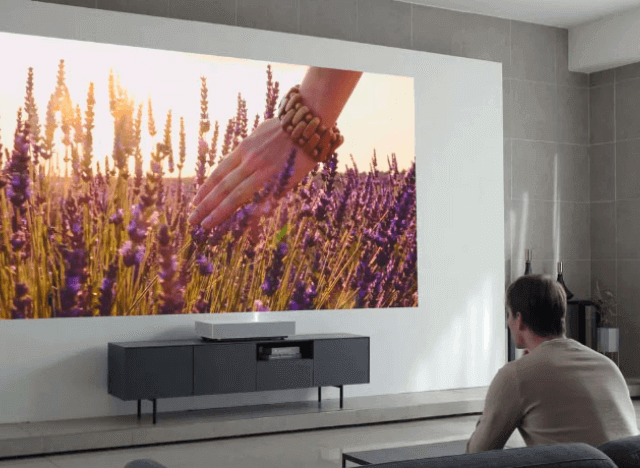 The short-throw and ultra-short-throw projectors were invented partially to cater to homes with rooms too small to allow for long throw distances. They were also made with business travels in mind, particularly businessmen without a conference room or ceiling-mounted projector to work with. The ultra-short projectors in particular work great in outdoor settings, in case you have your Nintendo Switch or PSP on hand to play games or a laptop to view movies and shows with. Regardless, the ability to create large pictures at short distances is a highly demanded type of product.