There are many types of projectors out there. You have DLP, LCD, LED, and LCoS. There are also different models of projectors on top of the projector types. Manufacturers range from BenQ and Optoma to Canon and Sony (and everything in between).

What are DLP Projectors?

A DLP (Digital Light Processing) projector is the projector that uses digital micro-mirror technology in order to display digital movies and TV shows on the big screen or widescreen. Incidentally, most digital cinema projectors nowadays use DLP tech.

It uses thousands of tiny mirrors coordinate by a powerful computer chipset in order to change and shift light reflection in accordance to the data provided by the digital video it’s attempting to render into a sharp, blur-free image. 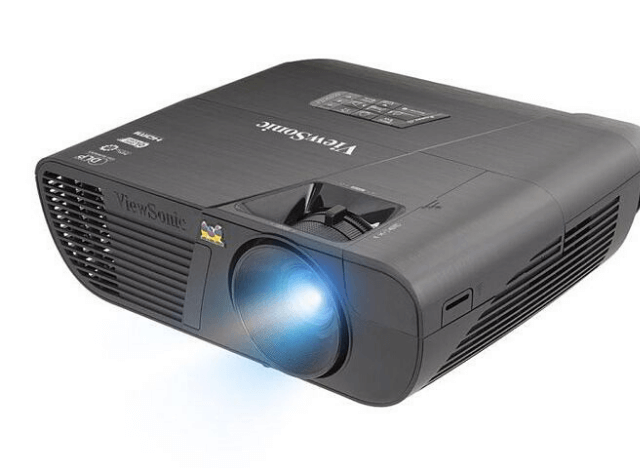 How Do DLP Projectors Work?

Every micro-mirror on the DLP projector creates an image in response to the data of the digital video. When on the position of “On”, the mirror reflects light towards the screen, which creates a visible pixel. In the “Off” position, mirrors reflect light away.

This prevents the light from going to the screen, creating the black levels. Some parts partially reflect light in order to create gradients or shades of grey in between the brightness and the shadows.

How a DLP Projector Works in Terms of Color

Single-chip DLPs use the color wheel to create color. This wheel spins RGB patterns in front of the lamp at high speeds. Thanks to persistence of vision, the blinking colors appear as one colored image to your naked eye. This technique is topnotch enough to deliver cinematic quality.

DLP understands how the human eye works, after all. Every 1/50 or a fraction of a second, the retina combines the RGB light to see the full image.

A single-chip DLP comes with a reflective surface with thousands of tiny mirrors. They coordinate with the light source in order to reflect and render digital imagery to any surface, specifically on projection screens.

What is the History of DLP Projectors?

DLP is essentially a set of chipsets that use a digital micro-mirror device to work and is based on optical micro-electro-mechanical technology. Larry Hornbeck from Texas Instruments originally developed the DLP projector back in 1987.

Even though DLP was invented by Texas Instruments, the first DLP-based projector was instead developed by Digital Projection Ltd back in 1997 a full decade later.

What are the Pros and Cons of a DLP Projector?

Let’s now discuss the pros and cons of a DLP projector.

What’s the Difference between a DLP Projector and an LCD Projector?

Liquid Crystal Display (LCD) projectors use non-micro mirrors in order to split projected light into 3 primary colors of red, green, and blue. They then pass into 3 separate liquid crystal prisms in order to converge the colors to form an image. This results in a rainbow-effect-free image.

In contrast to LCD projectors, DLP projectors have good picture quality that is poorer than what LCD offers. However, DLPs have higher contrast than LCD. It can also be smaller, lighter, and more easily portable than LCDs.

What Should You Look for in a DLP Projector?

DLP technology is widely used in commercial theaters, schools, businesses, and homes for home cinema setups. On that note, let’s discuss more about DLP projectors and what to look out for when buying them.

There are many things going for the DLP projector. It’s superior to the much older standard of LCD projector in terms of portability, modernity, maintenance-free operation, LED and laser support, sealed chipset, and jitter-free images that have higher contrast.

On the other hand, it’s not perfect and the LCD projector still outdoes it in terms of overall still image quality, saturation, and color richness without using a color wheel or dealing with rainbow afterimages from the projection.

The Optoma HD146X is a high-performance kind of projector costing around $550 and can be used for gaming or movie screenings. It has a brightness of 3,600 ANSI lumens, it features a single-chip design (uses color wheel), and its enhanced gaming mode allows for 16ms response time (reduced lag).

The LG PF50KA, on the other hand, showcases how portable a DLP projector can be with its micro-mirrors and computer chipsets controlling the digital video display. On top of all that, it has 600 ANSI lumens and a USB hardware interface to allow for on-the-go movie viewings.

Instead of mounting your projector or making a shelf for it, you can instead use a projector stand to keep them projecting correctly on your projector screen. Here are some ideas about them.