From the laser light that reads the contents of a compact disc to laser eye surgery (also known as Lasik) to correct eye problems, it’s easy to see that lasers or the concentrated beam of light technology is here to stay in the 21st Century and beyond.

With that in mind, what about laser projectors? How do they make use of the ubiquitous laser tech that’s so prevalent in our lives at present? What are laser projectors anyway? What are the things you should consider before buying such products?

What are Laser Projectors?

Ostensibly, a laser projector is a projector that uses a laser lamp instead of a Light-Emitting Diode (LED) lamp or halogen lamp in order to create those bright projections. A laser isn’t just a cutting tool so powerful it could slice a block of dense metal in half or a security measure to protect artifacts. 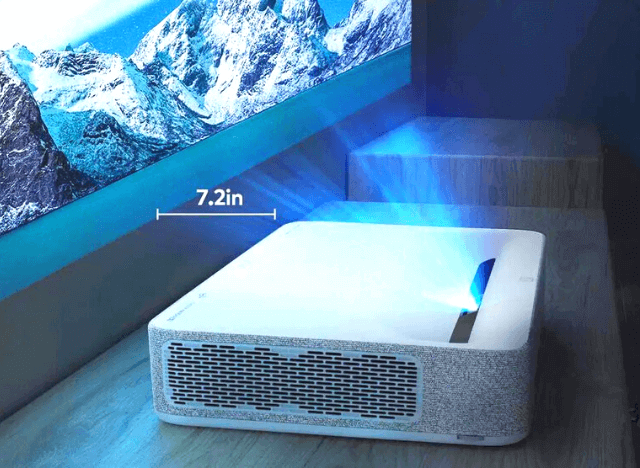 Why Were Laser Projectors Invented?

A laser could also be used as a reliable light source for consumer-grade home cinema or theater projectors. Laser applications vary from laser ablation procedures to laser light displays on the dance floor. They could also serve as a great alternative to traditional lamps or even LEDs in a projector.

The LED lamp is more long-lasting while the laser lamp is supposedly brighter and more expensive to produce. Admittedly, you get more bang from your buck from the LED than from the laser one.

What are Home Entertainment Laser Projectors?

A home entertainment laser projector is obviously a consumer-grade laser projector made for use at home to view movies, TV shows, or cable TV. They’ve been in the market since around 2015. Before them were lamp projectors and LED projectors.

They’re devices renowned for their ability to generate any light wavelength, which makes them capable of producing wider color gamut without compromising the brightness of the device itself.

Let’s now discuss what you need to look for when buying your own consumer-grade home entertainment laser projector. These devices project changing laser beams to the screen in order to make a digital moving image for professional or entertainment purposes.

What Should You Expect out of All Laser Projectors?

Such devices are characterized by their ability to generate various light wavelengths to allow for a variety or a gamut of color variegations possible while maintaining projector brightness. This thusly results in richer, deeper colors that come closer to real life than previous products.

What Do Laser Projectors Bring to the Table?

Laser projectors offer long-lasting brightness for superior home viewing of movies and a multitude of industrial applications. To wit:

Which Laser Projector Benefits Should You Look Out For?

You should look out for the following benefits and specs when shopping for a home theater laser projector for your home.

What are the Cons of Laser Projectors?

Not many detriments to getting a laser projector. However, like a laserdisc, it’s quite more expensive than lamp projectors. You might not have the budget to buy something costing from $1,000 to $2,500. You might get the same longevity—not necessarily quality—from an LED projector instead.

Lamp projectors, in contrast to laser projectors, are more affordable. They might also be considered the cost-effective choice if you’re not going to use the projector that much.

If you tend to only bring your projector out during special occasions or screenings instead of using it all-day everyday, the lamp projector is your best bet.

What You Need to Find Out

A laser projector is an expensive but worthwhile investment that might not be as cost-effective as its LED counterparts but offers unique benefits that should enhance your movie-viewing experience at home, particularly when it comes to projector brightness and color fidelity.

At this point, let’s talk about our top picks when it comes to laser projectors.

As for the WeMax Nova Short Throw Laser Projector, it’s the more expensive projector at $2,300. It’s favored by those who can afford it because of its UHD HDR10 display at 4K resolution, smart device functionality, and high FPS rate to view realistic-looking movies and video games with smooth motion.

The Optoma is superior in an affordable sort of way with its multiple perks at its price point. However, if you can afford WeMax Nova, it’s the superior projector for gamers and movie buffs alike.