Recently, LCoS projectors have grown in popularity even though they’re advertised more for their UHD specs and LED lighting than the fact that they’re neither DLP nor LCD projectors. Loads and loads of home theater aficionados have availed of these projectors.

It helps hugely that they’ve become more affordable through the years. With that said, what is an LCoS projector? What are the things you should consider before buying them? What does its acronym stand for?

What are LCoS Projectors?

Indeed, LCOS projectors can be so expensive it feels like you’re buying an LCD projector and DLP projector at the same time, especially those costing 5-digits.

The Best of Both Worlds

Tilting mirrors make DLP projectors work by reflecting light either away or into the lens. Meanwhile, liquid crystals on glass panels were utilized by LCD projectors in order to modulate the amount of light passing through the lens.

Meanwhile, LCoS projectors combine the liquid crystals of LCDs with the reflective mirror tech of DLPs. They’re similar to both types by being a hybrid of the two. They’re able to produce deeper blacks and whiter whites this way.

Why are LCoS Projectors so Expensive?

LCoS projectors are more expensive than DLPs and LCDs because they’re the high-end, high-resolution alternative to both. The home theater space with the price range of $3,500 to $12,000 is dominated by LCoS projectors as far as the United States is concerned.

DLPs have become the most ubiquitous type while LCDs have taken a back seat, becoming the budget or more affordable alternative to DLPs in the 2010s and 2020s, which is in stark contrast to the 2000s.  The 3-chip technology of LCOS allows it to control light within the Red, Green, and Blue (RGB) channels. 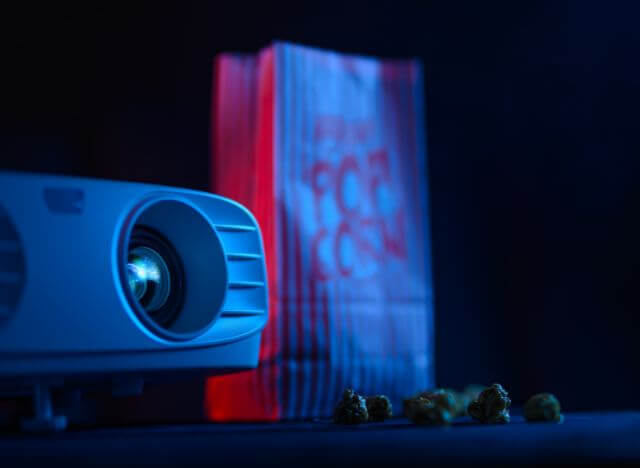 The LCOS 3-chip tech controls light so superbly it handles the RGB channels with zero rainbow effects whatsoever. Like with LCD, LCoS delivers color variegation with the deepest contrast possible, allowing more decipherable letters and textures to form across the projected image.

How Does the LCoS Projector Deal with the Rainbow Effect?

What’s more, the colors are simultaneously displayed instead of using the spinning color wheel to make the images have color like with the DLP single-chip projector. This is what allows LCoS to eliminate rainbow artifacting.

Those DLPs use the persistence of vision effect in order to make those quick flashes of color seamlessly turn into a colorful picture to the naked eye. This results in the rainbow effect, wherein there’s a rainbow afterimage from the moving pictures.

Who Makes All These LCoS Projectors Anyway?

JVC also offers LCoS projectors at the $25,000 price range as well. Right below, we’ve found some “best in class” caliber projectors to recommend to the reader—one from Sony (the cost-effective option) and another from JVC (the more expensive option).

Canon also has built an impressive reputation on the business and scientific use of such projectors. Their DICOM capable REALis LCoS projector line is popular in the medical field. They’re definitely expensive but a hospital should be able to shoulder such costs.

Mass market DLP home cinema makers such as Optoma and BenQ seem to have left the high-class market in order to make economy models for LCD and DLP. Home-based LCD projectors tend to cost under $3,500 after all.

Are LCoS Projectors More Suited Commercially Than for Home Use?

Admittedly, LCoS projectors are more of a commercial device than a home use or consumer device due to its price point. You can get one for the home but only if you’re willing to spend four-figure to five-figure prices for these devices. Game consoles are cheaper than these projectors.

However, more and more home theater projectors are being made among the latest line of LCoS. Most of them are made by the likes of Sony, JVC, Canon and so forth rather than the projector powerhouses like BenQ and Optoma, though.

As mentioned, Canon has projector models for use in medical fields, businesses, schools, and scientific study due to their superior image quality, contrast, brightness, and intensity. Their home use models are more DLP than LCOS. 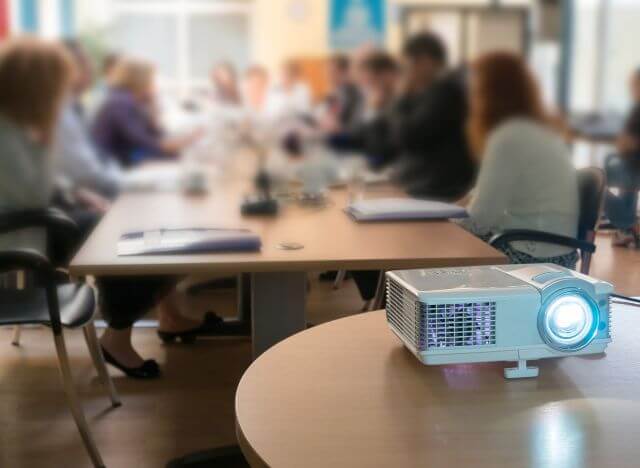 How Expensive are LCoS Projectors?

LCoS projectors are definitely more expensive than their DLP and LCD counterparts. They typically cost between $3,000 and $25,000 (or more). Meanwhile, most projectors that aren’t LCoS cost only upwards of $3,000.

An entry-level DLP projector can be bought for $500. LCD projectors don’t start out much higher than $500 either. The high investment price is more than made up for with LCOS projector benefits and features such as excellent dynamic range, more color variations, and the least visible pixels.

In the field of home theater or cinema, this translates to projections that pop out with realism. The black levels make everything more textured, solid, and voluminous, like you’re viewing something in 3D rather than something flat.

The expensiveness of these projectors allows for government, education, medical, and business application as well. You can depend on these projectors to project difficult-to-decipher images like X-rays, MRIs, and CATs.

High contrast projections ensure that the light and dark pixels on the screen are clearer, more vibrant, and sharper so that you won’t end up with a blurry and indecipherable mess. More nuance is allowed from a 100,000:1 contrast projector compared to a 400:1 contrast one.

What are the Pros and Cons of LCoS Tech?

Here are the benefits and detriments of LCoS technology. Even though it offers the best of both worlds, it can also suffer from the worst aspects of DLPs and LCDs, among other imperfections. There are also certain things where DLPs and LCDs stand superior compared to the LCoS.

Other technologies can also produce features like colorful images and high contrast. However, LCOS tech combines the best aspects of such tech in one device instead of across multiple devices and tech types.

Long story short, the pros of LCoS outweigh the cons but its price point tends to make it less accessible to the more serviceable LCD and DLP options. You can end up spending $25,000 or more on such devices but usually you only need about $3,000 to $5,000 worth of movie-viewing quality.

Even though at first glance, LCoS projectors seem too complicated to bother with, breaking down exactly what they are shows that they’re a viable if expensive alternative to the deluge of DLP and LCD projectors in the market to date.

Sony vs. JVC—Price vs. Quality

The Sony VW325ES is a 4K HDR Home Theater Projector. It’s a highly rated projector that costs about $5,500. This “budget” option from Sony is assuredly better than even the best DLPs quality-wise since that it’s made by Sony. It offers native 4K resolution, HDR compatibility, and 1,500 lumens brightness.

Between the two, JVC costs an extra $10,000 mostly because of its 8K resolution support (among the first of its kind in 2021). However, for most home theaters, Sony offers the most cost-effective solution. It’s superior to most DLPs and offers everything you need for current home cinema viewing standards.