What are LED projectors? They’re simply projectors (usually DLP or LCoS) that have LED lamps instead of standard metal halide or halogen lamps. LEDs (Light-Emitting Diodes) last much longer than your standard bulb (3,000 hours vs. 10,000 hours).

There’s been a lot of buzz lately for Light-Emitting Diode (LED) lamp projectors. It uses a technology that swiftly works to give you superior benefits to standard lamp projectors. The LED is a long-lasting type of bulb that used to be Christmas light sized but eventually became a halogen lamp alternative.

It’s also a fluorescent light alternative nowadays because of LED technology advances. With that said, what exactly are LED projectors? What are the things you need to consider before buying this type of display device?

What are LED Projectors?

Obviously, LED projectors are projectors with LED lamps instead of standard lamps using halogen or metal-halide lamps. LEDs are known for their longevity and brightness without producing so much wasted heat that shortens the lifespan of other bulb types.

LEDs—along with DLP-type projectors—came along around the Turn of the Millennium and started replacing fluorescent lights as the de facto lighting options for homes, apartments, offices, and commercial buildings. LED lamps guarantees you top-class picture quality for projections.

Here are the types of LED projectors to watch out for.

These devices require a cable to connect to the external media player for content projection. Typically, it uses HDMI or A/V cables in order to serve these requirements. They can connect to anything from laptops to smartphones.

The Universal Serial Bus LED projector uses the USB cable in order to connect to external devices. They’re also known as USB projectors. Some media devices allow them to produce video from the USB cable instead of the HDMI cable (usually, USB cables provide power and/or file transfer capabilities).

Some media players come with their own LED-lamp projectors. They don’t require external devices like DVDs or Blu-Ray Players in order to play media. They’re stand-alone media players with LED projector capabilities on their own.

The halogen lamps of old have ultimately been replaced by their LED counterparts. LCDs mostly use halogen lamps but DLPs can go either for standard lamps or LED lamps. Certain makers can combine LED projector functionality with the micronization of small pocket-sized devices.

There are also mid-sized LED projectors available. They can become small or portable mostly because of DLP technology that utilizes millions of micro-mirrors to create cinematic results.

The Benefits of Going the LED Projector Route

The LED projector is enhanced with many features and attributes such as Android app access to users or the ability to offer livestreaming options. 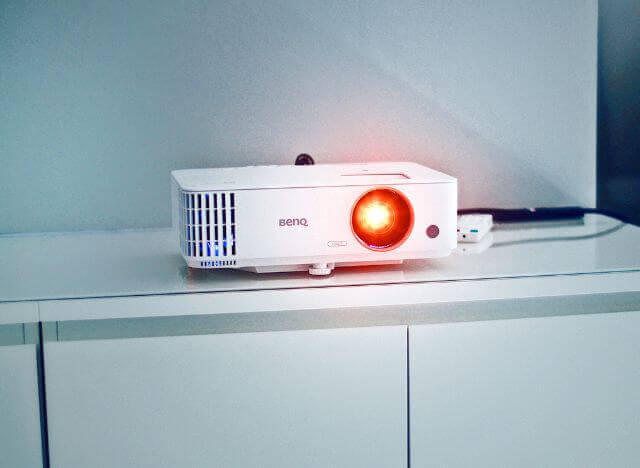 What to Look for When it Comes to LED Projector Types

When buying LED projectors, watch out for the different types and which ones have the best specs of their category.

They require external devices like cable boxes, DVDs, Blu-Rays, smartphones, tablets, and PCs. If they’re portable, make sure their rechargeable batteries last at least as long as a typical laptop battery. The wired DLP ones should have more screen adjustment options.

The connected electronic device provides it power and video signals like with a storage device to a laptop but in reverse. These projectors are rarer than standalone LED or DLP projectors. They’re also quite expensive by their nature.

If it’s able to read the USB connection as a video link, you should be able to use the projector image as an alternative monitor display without needing a special A/V cable like HDMI, DVI, or DP. The USB cable also serves as a power connection regardless (it has no battery).

Match up the application or purpose that applies most to your circumstances to the right type of LED projector available.

A portable standalone projector allows you to move from meeting to meeting easily. Just hook it up to different laptops or workstations in order to access different PowerPoint Presentation files or machine OS software. Or it could have the files in it already if it’s its own media player.

You can use the bright lights of the LED DLP projector to watch television in style via your cable box or your saved wedding video files. If you want to watch something like BDs and DVDs you might as well do so on the big screen. The quality of these projectors is second to none.

Once you can experience world-class big screen gaming, you’ll have a hard time going back to small-screen gaming. You can even do portable console gaming with a similarly portable DLP LED projector and a nearby wall or portable screen.

LED projectors are renowned for their brightness even in ambient light settings like the great outdoors as well as their lamp longevity. Halogen lamps only last for about 3,000 or so hours (maybe even less). An LED can last upwards of 50,000 hours or more or about 10 years of regular use.

With that said, we recommend the CiBest Outdoor Video Projector and Erosmate WiFi Projector.

As for the Erosmate WiFi Projector, it’s a Mini Projector for the iPhone that boasts 50,000 hours of lamp life. This 2021 Super HD Wireless Mirroring Projector that features compatibility with VGA, SD, USB, HDMI, iOS, and Android devices as well as the Amazon TV Stick or Roku Stick.