What are mini projectors? A mini projector is the midway point between a standard-size big box projector and a pocket-sized or smartphone-sized pico projector. They’re ideal for outdoor projection due to their extra brightness compared to their pico counterparts.

When shopping for a viable portable projector for your home theater or outdoorsy camping entertainment, you might end up cross-eyed with the multitude of options out there. It’s because of this that we’ve addressed your needs by covering which mini projectors out there truly are the best.

With that said, what exactly are mini projectors? What are the things you need to consider before buying a mini projector in the first place?

What are Mini Projectors?

They’re ideal for outdoor projection due to their extra brightness compared to their pico counterparts. It’s a miniaturized projector ideal for business travel or work purposes. Most of them work excellently with laptops such as MacBook Air, Dell Inspiron, and HP Pavilion. 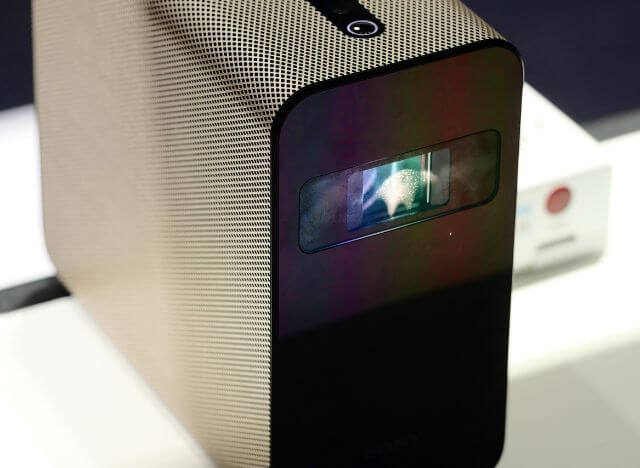 How are Mini Projectors Different from Normal Projectors?

Even though modern projectors are approaching game console size themselves due to advances in miniaturization technology, a mini projector still stands out from them by being roughly half or a quarter of their size. Even then, the pico projector is still much smaller (handheld size).

Quality in Exchange of Portability

Bigger modern DLP projectors have more space to spare for finely tuned technology as well as millions of extra micro-mirrors for superior pixel density and higher resolutions (UHD 4K to 8K). However, they also have larger fans that make them noisier than their smaller counterparts.

If you’re searching for the best mini projector out there for your laptop or media player, then keep on reading. We’ve scoured the Worldwide Web for the best candidates and narrowed them down to the two best ones based on user feedback and our own personal experience with them.

We’ve also made a list of what to look for in a mini projector based on the key features of the cream-of-the-crop of mini projectors out there. They go beyond typical features such as HD resolution and excellent contrast ratio, of course.

Optionally, you can get one with VGA, DP, or even DVI. There are also those that are “backwards compatible” with obsolete media connections like A/V, RCA, composite, and component video. Some notebook PCs accept what’s known as the mini HDMI port.

This requires a special mini HDMI cable to work. You can also use a mini HDMI adapter to link your mini HDMI to an HDMI display device though.

Get a battery-powered mini projector with a long-lasting battery for good measure. This way, you won’t have to invest so much in cable management accessories or extension cords in order to make your mini projector work outdoors.

Sure, a plugged-in mini projector is assured of continuous energy flow. It’s more practical to have the electrical socket handy. However, half the reason why you’re even interested in a mini projector is its portability. A battery-powered projector you can recharge like a smartphone is a truly portable device.

The best batteries last about 6 hours or more like a laptop battery. They can even be recharged using the USB-C port. Use the USB cable to recharge a low-battery mini projector using the power of your notebook PC.

Most built-in speakers for projectors are of the same grade of what is available on HDTVs or laptops. With that said, portable projectors maximize their portability by coming in built-in speakers. It works best with business trips, on-the-go presentations, or movie viewing while on vacation.

If your video has audio with it, you can use the built-in speakers to have its sound blare loudly and coincide with the high-quality HD picture. A projector with its own projectors doesn’t need separate Bluetooth speaker to work.

However, from our experience, it’s better to have a Bluetooth speaker, soundbar, or wireless ear pods handy because their audio has better quality and doesn’t sound as “tinny” or muffled as your average mini projector speaker.

A mini projector is designed to give you on-the-go projection perfection. It’s supposed to be your solution to cumbersome standard projectors that you can’t drag with you every business trip. It’s not as small as a pico projector.

However, pound-for-pound and inch-for-inch, an ultra portable pico projector with laser lamp tends to be more expensive than mini projectors that use LED as its lamp light source. It’s more affordable to get a much brighter and slightly bigger mini projector for outdoors movie viewing.

Sure, bigger projectors have more LED components and brighter bulbs, resulting in better and more pixel-dense picture quality. They can also project images with more power and at a much further throw distance.

However, mini projectors in 2021 have advanced enough to deliver more than serviceable and decently bright imagery for quality movie viewing that’s perfectly cinematic. They still can’t produce advanced features like 3D images though.

Even mini projectors have issues with overheating. It’s less of an issue with modern DLP or LCoS projectors compared to LCD projectors, but it’s still there due to the nature of projectors requiring high-intensity light to deliver the sharpest of images.

The best mini projectors out there have superior heat dispersion technology and sealed chipsets. This ensures your projector can operate for many hours without burning itself out even in the dankest of man caves or the most cramped dens around.

The best mini projectors don’t make a lot of sound. The smaller the projector the less sound it produces anyway. Standard-sized projectors tend to sound like engines due to their largeness requiring more fans to cool themselves down.

A mini projector is designed to cool itself down without huge fans and vents to do so, thus resulting in quieter operation and fewer overheating risks that could cut its operation life short when push comes to shove.

The best mini projectors have safety features included. For instance, it’s handy to have a mini projector that can shut its lens down automatically when objects end up too near it. This prevents you, friends, family members, or pets from accidentally shining the ultra-bright projector in the eyeball.

The LED or UHD light of even a brick-sized mini projector can blind anyone that directly puts their eyes unto its lamp or lens. Furthermore, get a portable display device that’s easy to control, easy to setup, and easy to handle with ergonomic buttons and interface.

Get something that’s plug-and-play too. This way, you can link up your mini projector to any laptop, smartphone, tablet, or media streaming stick to go and display various pictures, videos, and presentations to your heart’s content.

Where Do You Go From Here?

You now have a better idea of what are the best mini projectors currently available. The more high-quality they are in terms of resolution and image sharpness at this size the more expensive they tend to get because you’re paying both for their performance and their portability.

The Best Mini Projectors We Could Find

The ViewSonic M1 Portable Projector is a high-quality mini projector with similarly high-quality Dual Harman Kardon speakers. It’s a battery-powered projector that accepts HDMI and USB-C connections. We love it because it features high-quality 480p resolution and topnotch audio.

It’s even capable of streaming Netflix with the assistance of a Wi-Fi dongle and a media streaming stick.

Meanwhile, the ELEPHAS Portable Projector or Mini Projector for iPhone is our budget choice. It’s also connectible to any media source that accepts HDMI, USB, and most A/V connections. It comes with its own remote and can connect to laptops, smartphones, and tablets.