Did you know that smartphone technology has advanced so much in the last 13 or so years since the launch of the iPhone, the popularity of Android phones, and the rise and fall of Blackberries, and so forth that they’re practically handheld computers? It’s true. You can do anything with them. You can use them as a camera, a gaming device, a movie or music archive, streaming or browsing gadget, and so forth. The only problem is that their display is usually too small to give you a cinematic movie-viewing experience.

Thankfully, you can link up a projector with an iPhone or iPad to get you big-screen privileges using mostly handheld or portable devices. Our pick for the best mini projector for iPhones and iPads is the TOPVISION Mini Projector for Smartphones and Tablets. Why? It’s because it’s fully compatible with many of the latest versions of iPhones and iPads. It can be used for presentations like with your laptop or with movie-viewing like with your DVD or BD player.

A simple adapter cable is usually enough to connect your iPhone to a projector. Every projector has a video cable used to connect to notebook PCs, tablets, and phones whose content will then, in turn, be projected through its lens and screen. That’s what’s needed here. The beauty of TOPVISION is that you can easily link it with an iPad or iPhone without needing an adapter (more on this later), but if you wish to use an adapter that can work too.

There are two adapters for you to choose from that Apple sells for the projector or monitor linkage.

If you regularly use a specific projector type for your iPad or iPhone, you can simply buy a specific set of cables for that projector. For example, use HDMI adapters for all projectors or perhaps VGA with the 30-pin cable and screws on either side for more vintage ones. Remember that HDMI is the thin, wide plug that’s mostly used for linking devices to HDTVs.

If you’re always on the go and you wish to use your iPhone or iPad for presentations on different available projectors instead of movie-viewing, then you can have both cables on hand. However, if you’re instead using it for movies and TV shows, an HDMI adapter will mostly suffice.

How to Connect Your iPhone or iPad to a Projector Wirelessly?

There are two ways to connect your iPhone or iPad to your projector wirelessly. You can broadcast it through your Wi-Fi connection or through the help of a wireless dongle. It either uses the Internet or it uses its own wireless waves transmitted by dongle or transceiver to a receiver on the HDMI end of your projector. As for Internet connections, you can link up your projector through devices like Chromecast or Apple Fire TV Stick in order to also link up to

What Does TOPVISION Bring to The Table?

TOPVISION, first and foremost, is a mini projector specifically made in order to connect to many types and models of smartphones and tablets, particularly iOS devices like iPhones and iPads as well as Androids. It’s a projector capable of synchronizing or mirroring your iPhone/iPad screen with up to 1080p support.

You can view pictures, do presentations, and play any movies that you can play on your phone or tablet. You can also use your phone to play Netflix, Hulu, or Amazon Prime then mirror it on your projector so that you don’t need a Chromecast or Amazon FireStick to stream exclusive online content. 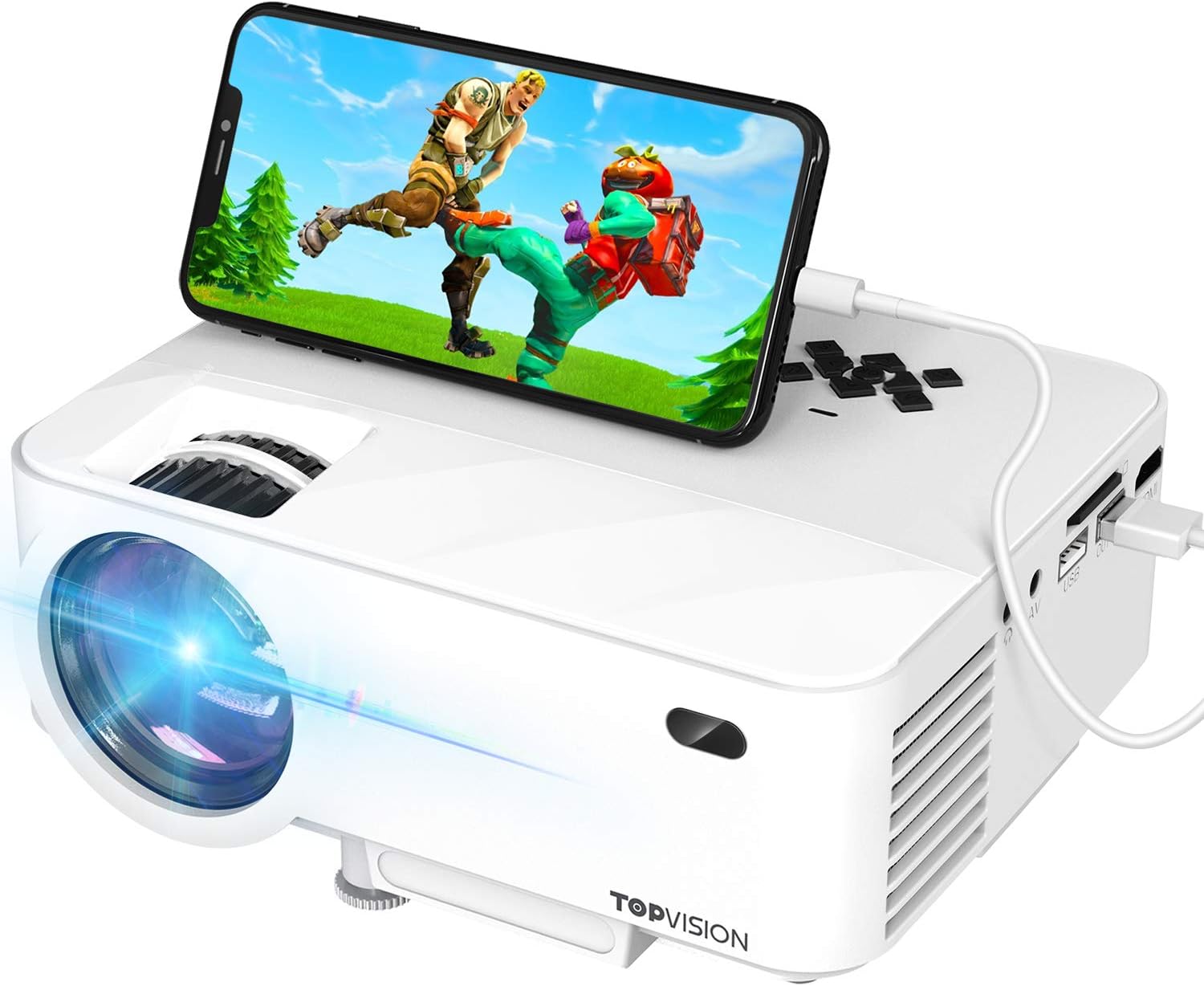 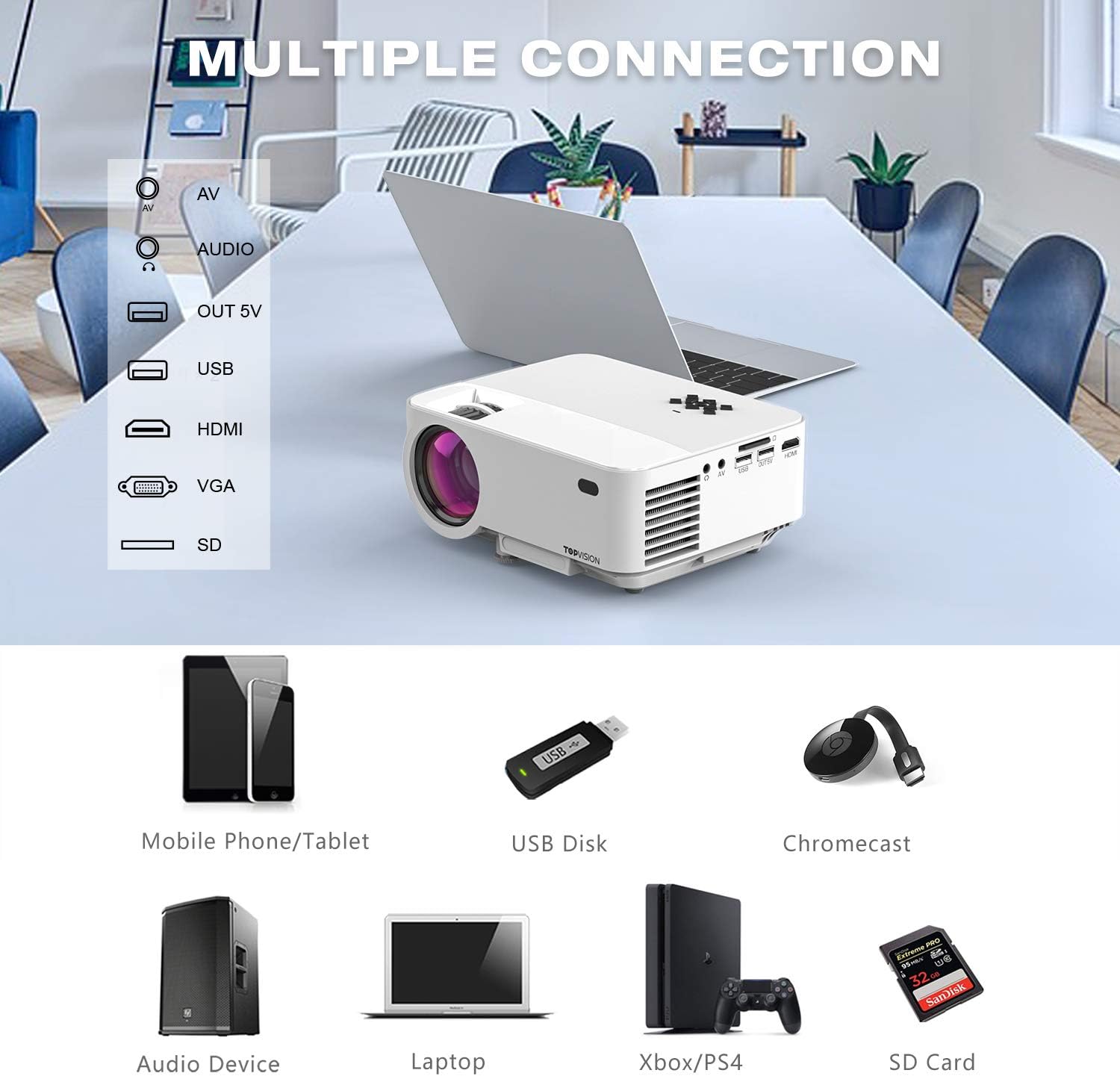 TOPVISION Mini Projector supports 176-inch displays or the widest of projector screens. Its LED lamp has 50,000 hours of service. It’s also compatible with DVD players, laptops, cable TV or satellite boxes, VGA, HDMI, Roku, and the Fire TV Stick. However, its main claim to fame in this article is its ease of use when mirroring content on your iPhone or iPad. A USB cable is enough to mirror either device type’s screen via the projector. It can also be linked through Wi-Fi or adapters in case you want alternative ways of projection connection.

You can always depend on the lovable tandem of the TOPVISION Mini Projector and your iPhone/iPad whether you’re leading a business seminar or hosting movie night (indoors or outdoors). You can mirror the screen of your iPhone unto your projector and pretty much do anything with it, from watch movies or prepare presentations through a presentation app. It’s less bulky to do presentations with an iPad or iPhone. You don’t need as many wires or plugs to play movies with a smartphone either. You can even play mobile games through the iPhone/iPad and projector connection.