You can buy a specific color of the projector screen in order to neutrally feature the projector image, add a bit of gain to it to make it brighter even in ambient light conditions, or increase its contrast to make it sharper or more detailed. Yes, projector color is that important.

With that said, what if you wish to change the color of your projector? What’s the best paint color for a projector screen anyway? Keep on reading about paint colors to find out.

You may also like: Projector Screen versus Wall – Which Is Better?

The most neutral of all paint colors is white paint. You can’t use ordinary white paint though. You should get those used for projector screens or even walls made into projector screens. Your paint should produce a smooth finish that reflects the least amount of light for good measure. 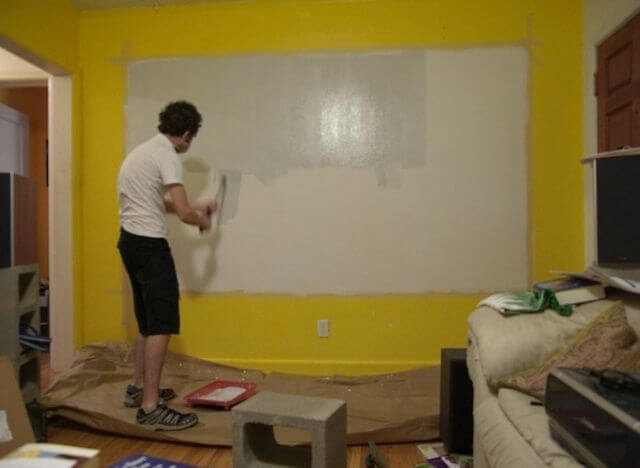 White is a favored color of screen paint because it’s a no-nonsense color with neutral gain. Gain refers to the amount of reflective properties the paint produces or the ratio of light that is reflected back from a surface from a light source. Neutral gain means there’s zero gain from white paint.

Some paints claim slight gain but it’s so negligible they’re practically nonexistent. Then again, it doesn’t hurt to get as much gain as possible.

The Benefits of White Paint

Painting a wall or repainting an existing screen with white paint ensures that the video is faithfully reproduced on-screen. They remain the current screen color standard due to their color accuracy and bright whites when the video is projected unto the screen.

They work great on PVC material because it offers an illumination effect when push comes to shove. Additionally, this color choice gives the most generous viewing angles compared to other colors. Black levels work weaker on white though.

Before the advent of HDMI connectors, gray screens were all the rage as a white screen alternative. However, as technologies advanced and DLPs produced images with deeper blacks even on white screens, fewer and fewer people bought grey-painted screens.

It doesn’t hurt to have a gray screen that makes your black levels blacker without necessarily painting the screen black and going overboard (more on this later). DLP combined with gray screens make for some rich, high-contrast viewing.

It’s still being sold today due to its ambient light absorption properties making it ideal for outdoor screenings. Many people make their own DIY grey screens by painting a white screen with a bucket of gray screen paint, in fact.

It’s handy during instances where you can’t turn the lights off, like when using a projector during classes, presentations, meetings, and conferences.

Ever heard of the term “Silver Screen” when referring to films made during the Golden Age of Hollywood? That’s not just a metaphor. Silent films and “movies” (videos or projected images that move versus still image slideshows) made use of silver paint on screens to increase gain.

Why Silver Paint was Necessary Back in the Day

Silver paint was necessary back in the day because projectors back in the day couldn’t reach the brightness or the contrast ratio of today’s projectors. They had lamps made of either incandescent bulbs or even gas lights.

This required a super glossy and super reflective painted surface. Today’s paints are available in matte or flat colors because being too glossy would result in an image that’s too bright for the eyes. This wasn’t the case during the Silver Screen age of Hollywood and Silent Film.

Hot spotting occurs when a bright spot appears on your screen, making it difficult to view. White and gray screens neutralize hot-spotting. The reflective materials of silver screens do not, so it continues to be a problem.

It’s solved by finding a surface or emulsion that diffuses the silver properties better. Current silver screens like the 122=inch Vutec SilverStar prevent hotspotting with decent light diffusion. Your silver paint of choice should also have diffusive properties as well.

Last but not least is black paint. There’s a reason why black paint isn’t a common screen paint choice among your usual white, grey, and silver paints. It’s because it is gray times ten. The contrast it provides is too much. The color becomes too bright. It absorbs ambient light too well.

Black Screen Paint Can Work Through

If you really want to use black screens, black walls, or black screen paint, you should go through several caveats. Make sure your projector can deal with its blackness. It also produces a shimmer or rainbow effect, which is already present in DLPs without needing a black screen.

When buying a bucket of black screen paint, make sure you have one with deep color saturation. The bottomless black levels come by default among all black screen paints. Also use screen or wall material that encourages better light diffusion.

This way, you get to enjoy black screen benefits better, such as improved reproduction of the darker portions of the image or making the bright colors look better on the darker screen due to contrast. Contrast levels can go through the roof without projector assistance.

You can get the best projector screen paint that cost around $100 or so. To get it cheaper means you’re willing to sacrifice quality in terms of cost. This can include lower gain, lower reflective properties, and lower contrast overall.

If you decide to buy the absolute best projector paint instead, we recommend Stewart Filmscreen Studiotek 100 or ProClassic Smooth Enamel Satin Finish.

Related: Can You Use a Projector on a Dark Wall?